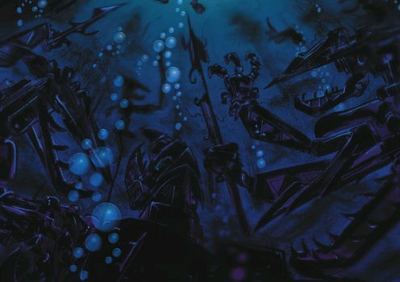 The Zyglak are a species of organic, reptilian Rahi-like creatures accidentally created by the Great Beings in their attempts to create Krana. Shunned by their creators and feared across the Matoran Universe, the Zyglak fled to the most remote parts of the universe, lurking and brooding in ruins and the depths of Voya Nui.

Attack Potency: City level+ (Zyglak are physically superior to Toa and have killed many of them), can ignore conventional durability with their weapons, which disintegrate those they wound.

Standard Equipment: Melee weapons such as spears and knives that disintegrate objects on contact.

Intelligence: Varies, though they're all sapient.

Retrieved from "https://vsbattles.fandom.com/wiki/Zyglak?oldid=5735872"
Community content is available under CC-BY-SA unless otherwise noted.