Zuggtmoy is the Demon Queen of Fungi, the Lady of Rot and Decay, and the mortal enemy of Jubilex, Demon Lord of Ooze. Her followers and, of course, herself, believe in parasitic activity, feeding off of others, to survive. The children of Zuggtmoy are often spoken of in dread- disease ridden creatures and often the fungi itself, come alive to serve their mother, and feed on those unwary enough to come close.

The most infamous act of Zuggtmoy in recent times is the marriage to the great fungus of the Underdark, causing the entire Underdark to potentially become infected with the fungi of the Demon Lord. In terms of political power in the Abyss, Zuggtmoy is generally regarded as one of the weaker prominent Demon Lords, largely due to her inability to slay Jubilex, who remains considered the weakest.

Name: Zuggtmoy, the Lady of Rot and Decay, the Queen of Fungi

Origin: Dungeons and Dragons (Fiendish Codex I: Hordes of the Abyss)

Powers and Abilities: Superhuman Physical Characteristics, Abstract Existence (Type 1, as an Outsider she has a purely abstract physiology, given the visage of viscera and flesh), Absorption/Biological Manipulation (As the Fungi Queen she can absorb lifeforms, including Araumycos, the great fungus living in the Underdark; she does this, bringing creatures into her body and engulfing them in fungi), Body Control, Martial Arts, Summoning, Enhanced Senses, Damage Reduction, Conceptual Manipulation (Type 2, much like gods Demon Lords are the embodiments of their concepts, in this case, fungus, and can control them throughout the multiverse), Regeneration (Mid-Godly), Enhanced Senses, Magic, Reality Warping, Time Manipulation, Spatial Manipulation (All Demon Lords are capable of fully altering the space-time of their layers of the Abyss to completely match their ideals; furthermore, Zuggtmoy can turn vast areas of space into another Layer of the Abyss, absorbing the universe into the Abyss itself), Plant Manipulation, Holy Manipulation, Death Manipulation, Paralysis Inducement, Statistics Reduction, Disease Manipulation, Darkness Manipulation, Good Detection, Teleportation, Telekinesis, Magic Nullification, Aura, Causality Manipulation (Can make use of Wish, which warps past, present, and future to make sure the desired effect takes place in the present), Transmutation, Shapeshifting, Text Manipulation (Can generate symbols that, when seen, induce various effects, including immediate death, insanity, and a weakness of self), Pain Manipulation, Fungus Manipulation, Power Bestowal, Dimensional Travel, Probability Manipulation (Capable of increasing one's chances in a certain action, when they fail to resist an effect can warp probability to instead succeed in it), Immortality (Types 1, 2, 3, 4, and 8, avatars have 6 and 9, Outsiders, when slain outside of their home plane, will drop their essence back into their own plane of existence to be reborn, typically a century later for lesser Outsiders and potentially instantly otherwise), Possession, Regeneration Nullification (Mid-Godly, Demon Lords are capable of slaying each other permanently), Life Manipulation, Fire Manipulation, Necromancy (Can create fungal zombies and other powerful undead), Mind Manipulation, Acid Manipulation, Poison Manipulation (Her plane of existence is littered with poisonous spores and acidic pools), Madness Manipulation (Type 3, remaining in her presence causes madness passively), True Seeing (Allows seeing straight through shapeshifted forms, illusions, invisibility, and false representations of reality), Willpower Manipulation, Large Size (Type 0), Avatar Creation, Self-Sustenance (Types 2 and 3),Chaos Manipulation/Law Manipulation (Demons play into the multiversal balance of Chaos and Law; they are formed from Chaos and their mere presence raises levels of ambient chaos, thus causing chaotic effects to take place. With enough of an upset balance, entire planes of existence can be sent careening into the Abyss), BFR (Anything a demon eats is sent to the Abyss), Fear Manipulation, Memory Manipulation (The insides of demons generate "blood", a black viscous material that, when it comes into contact with an enemy, induces supernatural fear and short term memory loss), Acausality (Types 1 and 4, comparable to deities on the level of Labelas Enoreth, who is the reason causality even proceeds), Corruption (Type 1, 2, and 3), Soul Manipulation (Demonic interaction rends the soul and corrupts the flesh; Demons can devour souls, erasing them throughout existence), Blood Manipulation (Blood spontaneously appears in the presence of demons, oozing from walls and filling structures), Weather Manipulation (Weather is affected by the Chaotic upset of a demon's presence, causing effects such as blizzards in the middle of summer or earthquakes away from fault lines), Power Modification (Demons cause magical powers to become slightly modified in their presence, giving them a sickly, corrupted look), Death Manipulation (Plants and animals die for inexplicable reasons when in the same biome as a demon), Disease Manipulation (Creatures of good or lawful alignments may become sickened or ill at ease when in a Demon's presence), Animal Manipulation, Biological Manipulation (A demon can warp the creatures in the area into dire forms of itself, becoming stronger and meaner), Possession (Demons of even lower stature can possess enemies to take control of them), Non-Corporeal (Demons become insubstantial wisps whilst attempting to possess enemies, being unable to be touched even by other spiritual creatures), Astral Projection (Demons can project freely onto the Astral Plane), Mind Manipulation (Demons possessing a foe can take over their minds), Sense Manipulation (Aside from the target's mind, a demon can hijack a target's senses), Transformation (Possessed creatures can have their physiologies altered into those of demons over a course of days), Curse Manipulation and Statistics Reduction (Demons who take the role of a Corrupter Demon can, upon possessing a target or object, bestow curses with a touch, inducing severely reduced stats and capabilities), Power Bestowal (An Enhancer demon can bestow abilities upon an object it possesses, making it far stronger with various magical effects), Telepathy (All demon types maintain telepathy), Fungus Manipulation

Attack Potency: Varies from Small Building level to Large Building level+ (Her aspects are listed as being considerably weaker than herself, ranging in CR from 6 to 9) | Varies from Island level+ to at least Small Country level+, possibly Country level (Zuggtmoy is among the weakest of the Demon Lords, and her form outside of her realm of power is, while powerful, more comparable to creatures such as Imix and Kezef the Chaos Hound) | Universe level+ (Even as one of the weakest Demon Lords known, Zuggtmoy is capable of warping the space-time of her layer of the Abyss, which can be infinite in size if the Lord commands it and has a separate space-time to the other layers of the Abyss) 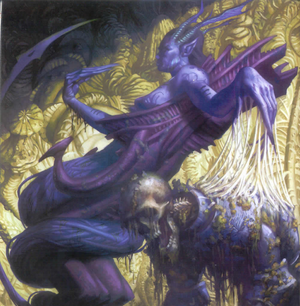 Artwork of Zuggtmoy inside of Dragon Magazine. 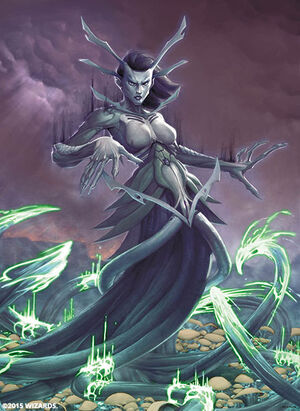 Zuggtmoy as she appeared on Dragon #337's Cover 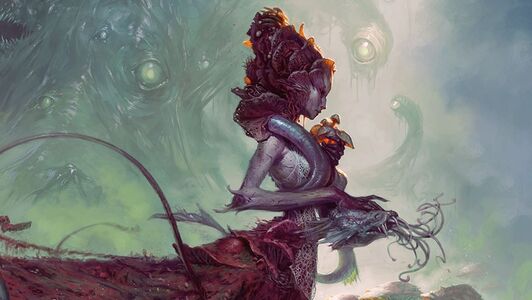 Zuggtmoy's official 5th edition Artwork as she prepares for her wedding 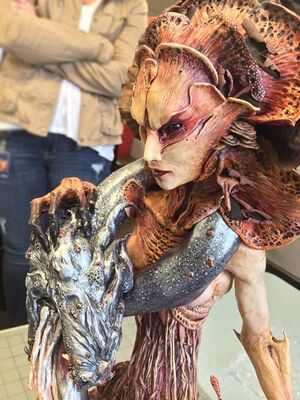 A statue of Zuggtmoy created by Wizards of the Coast 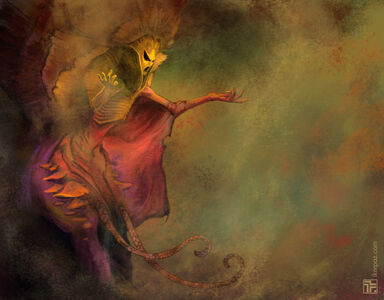 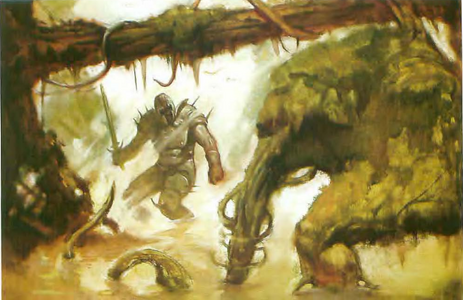 Key: Aspect | Outside the Abyss | Within the Abyss

Retrieved from "https://vsbattles.fandom.com/wiki/Zuggtmoy,_the_Lady_of_Rot?oldid=6106531"
Community content is available under CC-BY-SA unless otherwise noted.