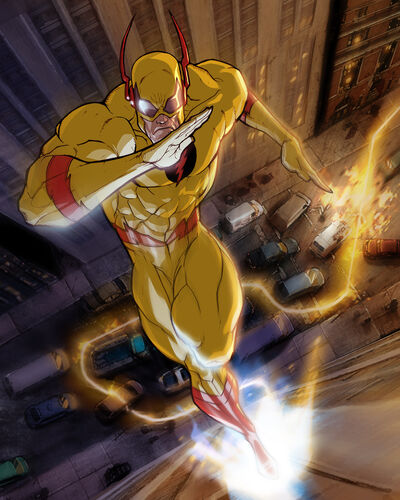 Hunter Zolomon, better known as Zoom, is Wally West's archnemesis. Once a close confidant and colleague of West in both his day job as a forensic analyst and in superheroics, Zolomon became obsessed with tragedy and understanding the criminal mind after his father killed his mother along with six other women. When an attack by Gorilla Grodd left Zolomon paralyzed from the waist down, West refused to use the Cosmic Treadmill to stop the events leading up to Zolomon's paralysis due to the instability it would create in the space-time continuum. Undeterred, Zolomon broke into the Flash Museum and tried to use the Treadmill himself, destroying it along with the Museum in a catastrophic explosion.

At the same time, the incident cured his paralysis and granted him the ability to alter the flow of time around him to grant him incredible superhuman speed. Convinced that West's lack of personal tragedy in his life was preventing him from becoming an optimal hero, Zolomon became the new Zoom to cause the speedsters grief and suffering in his misguided attempts to better the world.

Tier: Unknown, up to 4-B while running

Speed: Massively FTL+ (Wally saw him as a blur after absorbing the speed of Jay Garrick and Bart Allen), up to Infinite with the Forever Force (Able to accelerate, slow down, or stop his own time as much as he wants, to the point where time is locked or being frozen in time)

Feats: He has defeated the Flashes and blitzed them in combat. Wonder Woman stated in their fight that he hits harder than Superman as he blitzed her and punched her across the world.