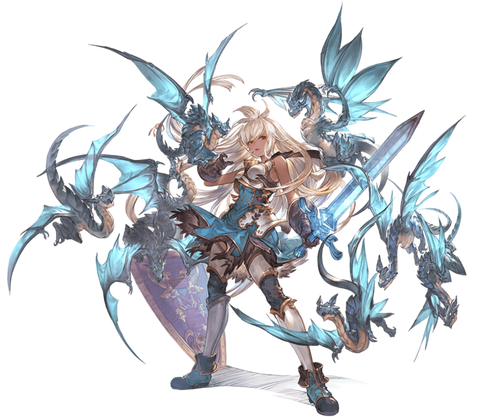 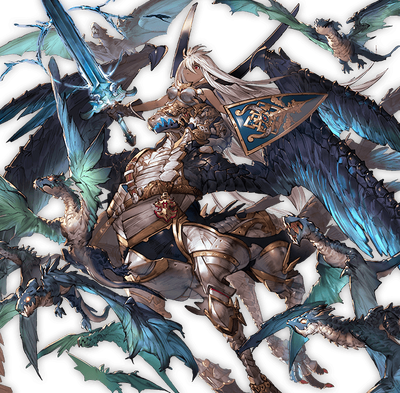 Zooey is the force that protects the skies from the possible threats of destruction of all. The fragments of consciousness all hoping to protect this world enveloped in stars and skies gathered together to give birth to this young girl as the arbitrator of the skies. With a legion of dragons by her side, she brandishes an azure sword ready to destroy any foe who dares to disturb the balance of the world.

Name: Zooey, Grand Order, The Peacemaker, Arbiter of the Skies

Powers and Abilities: Superhuman Physical Characteristics, Martial Arts (One of her cosmos weapons is a gauntlet which implies knowledge in hand to hand combat), Weapon Mastery and Weapon Creation (Can create 10 weapon types of cosmos weapons and use each depends on the situation), Size Manipulation and Large Size (Type 2 in her Grand Order), Creation (Can create object out of nothing by borrowing the powers of stars), Durability Negation (With Conjunction and Spinning Slash), Spatial Manipulation (Bisection cause Spacial Rupture), Abstract Existence (Type 1 in her true form), Immortality (Type 1, 2, 3, 4, 5 and 8 in her true form ; as long as someone wishes she will exist), Aura (Geo was able to detect her aura approaching making him retreat in panic), Absorption and Healing (Capable of using Conjunction on herself allowing her attacks to drain from the enemy to heal), Acrobatics (Ray Strike increases her movement allowing her to dodge easier), Avatar Creation (Created a Skydweller Avatar to dwell within the sky realm to avoid attracting attention), Blessed (A being created from the consciousness of people wanting to protect the world and was entrusted by the power of 12 Divine General), Breath Attack (Peacemaker's Wing is capable of breathing gamma ray from its mouth), Clairvoyance and Precognition (She can see threat from around the world that could escalate to throwing the world off balance even if it will eventually be stopped naturally), Statistics Amplification (Convergence doubles her speed and The Last Wish greatly increases her offensive and defensive statistic), Statistics Reduction and Paralysis Inducement (Thunder reduces enemies capability and can paralyze target), Damage Boost (Her damage increases further more on critical state with Resolution), Reactive Evolution (Resolution modifies its element base on enemy weakness), Damage Reduction (Opposition sharply decreases the targets damage), Invulnerability (Prism Halo make her invulnerable for a short while), Electricity Manipulation and Plasma Manipulation (Can call upon thunder and fire plasma from her weapon), Energy Projection, Elemental Manipulation (The Wyvern she summons are capable of breathing and attacking with different elemental attacks), Enhanced Senses and Extrasensory Perception (Can perceive and detect unnatural changes in the world), Explosion Manipulation (Can shoot Gamma Ray to the surface to erupt unto the target), Flight (Can fly even outside orbit), Fusionism (Can Fuse with Peacemaker's Wing), Holy Manipulation, Light Manipulation, Invisibility and Non-Corporeal (Primal Beast can go into their non-corporeal form at will), Magic, Power Bestowal (The Last Wish's Signs of Zooey can bless allies that increases their offensive and defensive capability by a 100%), Regeneration (Mid-Godly; Primals are able to regenerate after being reduced to their concept), Resurrection (Primal Beast can ressurect themselves at later time), Purification (Became a Priestess and was entrusted by the 12 Divine General's power to purify Klesha or negative emotion), Self-Sustenance, Spaceflight (Capable of flying outside of orbit to catch Joya), Summoning (Can summon Peacemaker's Wing and Wyverns), Teleportation (Can teleport outside of orbit and within the skyrealm), Builds up Resistance to Statistics Reduction and Status Effect Inducement the more she is exposed to it, Incapable of harboring Negative Emotion

Attack Potency: Planet level (Her Skydweller form still posses her strength as Grand Order and is capable of summoning Peacemaker's Wing) | Planet level, likely higher (As a nightmare raid boss, she should be stronger than the likes of Shiva, who can destroy the world)

Lifting Strength: Class K (Comparable to Colossus who can lift this much from sheer size alone | At least Class K

Range: Extended melee range to kilometers with magic. Thousands of Kilometers to Planetary with Gamma Ray (she can teleport and launch Gamma Ray from orbit in an instant).

Intelligence: Gifted (Aware of all things that can throw the world off-balance)

Weaknesses: Weak to dark-based attacks. Can be naive to the customs of skydwellers. Her Magic acts independently from herself. Her human form is smaller in size. Her being abstract is only applicable when her power is drained completely, and this is more a downside than anything else, as Primals in their abstract forms is completely powerless.

Retrieved from "https://vsbattles.fandom.com/wiki/Zooey_(Granblue_Fantasy)?oldid=5332693"
Community content is available under CC-BY-SA unless otherwise noted.