Zoo Tycoon is a series of simulation games in which you are put in charge of building a successful zoo. The first game released in 2001, with two additional expansion packs: Marine Mania and Dinosaur Digs.

The sequel, Zoo Tycoon 2, released in 2004. The scope of the game expanded to fully modeled, 3D maps with complex animal behaviors and vast amounts of environmental customization.

The fourth expansion pack, Extinct Animals, released in 2007. It added a slew of new objectives, including calming rampaging dinosaurs, curing prehistoric diseases, finding fossils, cloning extinct animals, thawing out cavemen from icebergs, and the final new set of twenty animals, this time going from everything from harmless dodos to lumbering, bloodthirsty theropods.

Later, in 2013, a new Zoo Tycoon game released on the Xbox One. It removed most of the beloved features, and was generally regarded as the franchise's equivalent of Sonic 06 by the fanbase.

Most of the characters in this verse aren't notable fighters, however, there are some outliers. Zookeepers are unstoppable forces, equipped with Dimensional Storage, Self-Sustenance, Immortality, Sealing, and a slew of other inhuman powers. The guests themselves are formidable stone walls in their own right, and can survive attacks from great white sharks, Utahraptors, wearing t-shirts in Antarctica, and being dropped off enormous cliffs and waterfalls.

Almost every dinosaur, bar the Proarcheopteryx and Velociraptor, has a rampage state where they become able to smash through small buildings, electric fences made of reinforced steel, large trees, and other objects around the zoo, which puts them and everything that can kill them at Small Building level. The Carnotaurus and Tyrannosaurus rex are also the only entities in the game capable of permanently killing a zoo guest.

The Killer Penguin, a joke animal created in the Extinct Research Lab, can kill any animal in the game, reducing them to a few rib bones and a chunk of meat in a matter of seconds.

The Player is a godlike, Town-level force, with enormous amounts of hax that would allow them to take on forces far beyond their power level.

The Player
Add a photo to this gallery 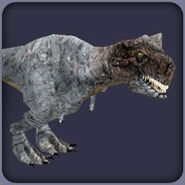 Tyrannosaurus Rex
Add a photo to this gallery
Retrieved from "https://vsbattles.fandom.com/wiki/Zoo_Tycoon?oldid=6048154"
Community content is available under CC-BY-SA unless otherwise noted.