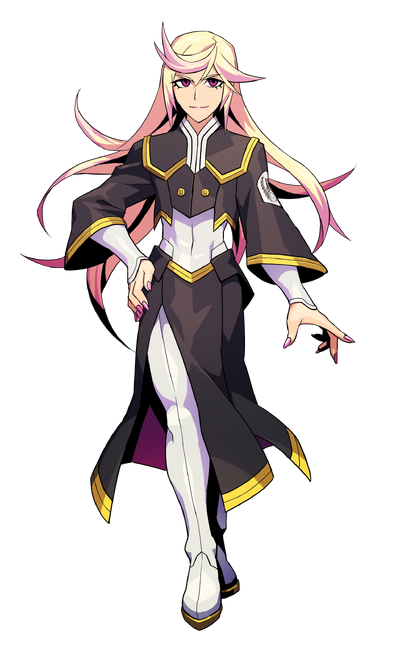 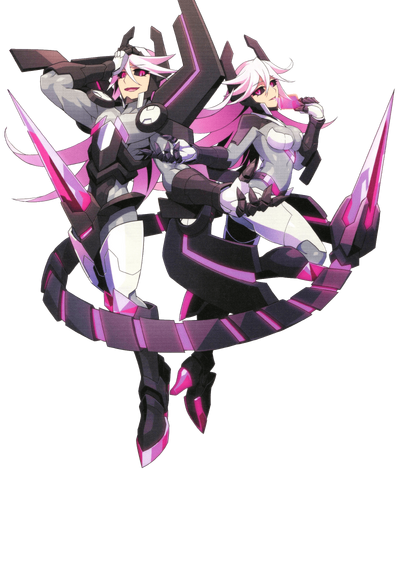 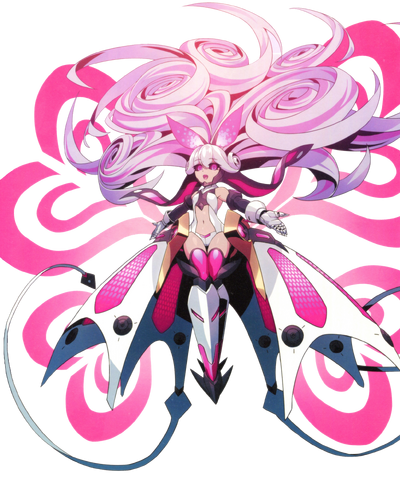 Zonda, called Pantera in Japan, known as the Lustful Mirage during her time at Sumeragi, is a minor antagonist in the original Azure Striker Gunvolt and the main antagonist of Azure Striker Gunvolt 2. Initially introduced as an enigmatic member of the Sumeragi Seven, it's revealed that Zonda was a mere illusion, created to gain important information on Glaives and the Muse. As it turns out, she happens to be the leader of a multinational Adept group called Eden, which seeks to create a so-called paradise for Adepts by exterminating humanity as a whole.

In Eden's Paradise, a Drama CD, it's shown that unlike Demerzel, a villain with very similar goals to her, her main focus is making an Adept Utopia, and she doesn't hold as much of a grudge against humans as some other Adepts, as shown when she wanted to help a victim of an attack on Adepts cope emotionally instead of killing the humans who did it.

Superhuman Physical Characteristics, Illusion Creation, Soul Manipulation/Sealing, Teleportation, Transformation, Summoning,Energy Projection, Levitation, Light Manipulation (with Phantasmagoria), and limited Reality Warping (with her Septima, Phantasm Mirror, she can create illusions and make them "real", swap genders at a moment's notice, granting her different fighting styles, and can seal souls inside her mirrors), Extrasensory Perception (Is able to see Joule as a spirit), limited Nonexistent Physiology (Type 1. Exists solely as a tangible illusion created by Zonda's true self), Inorganic Physiology (Type 2. Zonda's illusions are specifically noted to not be alive)

All True Form powers vastly enhanced, Healing, Deconstruction and Pain Manipulation with Paradise Lost (Gunvolt felt as though his body was slowly being torn apart when he was being affected by the power. Gunvolt still felt this way even while evading the attack, and as such taking no damage from it), Forcefield Creation, Can create a vacuum that bypasses Elemental Intangibility

Attack Potency: Varies. Large Town level (Considered comparable to Nova "The Mighty" when hiding most of her power. Defeated Zeno, an Adept who Gunvolt considered powerful) to Small City level (Fought Gunvolt and/or Copen in Gunvolt 2) | Up to Small City level with illusions (Can create copies of the seven and herself that can fight Gunvolt 2 Gunvolt and Copen, even when not holding on to any shards herself). Can ignore conventional durability to an extent with her Septima in some ways | Mountain level (Stated that her power had multiplied "A Hundredfold". Note that she gained this form from Joule, an adept known for amplifying Septimas, and Zonda herself is a genius who had been studying The Muse for an extended period of time)

Lifting Strength: Below Average Human (That of a child her age), likely far higher with her septima

Striking Strength: Likely Varies from Large Town Class to Small City Class (Able to damage Gunvolt and Copen with physical strikes) | Possibly Street Class (Has never physically fought in this form, but should be at least comparable to normal humans in her verse) | Mountain Class (Though she doesn't use physical strikes in this form, she should be considerably more powerful than her false forms. The Hundredfold multiplier may apply to this statistic, as well)

Durability: Varies. Large Town level (Considered comparable to Nova and Gunvolt) to Small City level (Able to take several hits from Gunvolt and Copen) | Unknown (Tenjian was comfortable having her reveal her true self in front of Gunvolt and Copen, though advised her to leave once Gunvolt broke out of his ice), up to Small City level with illusions (It should be noted that she can somewhat transform into her illusions, meaning the durability would apply to herself in a combat situation) | Mountain level (Able to take hits from Gunvolt when he used his own anthem)

Stamina: Very High (Did battle with Gunvolt on three separate occasions without suffering from fatigue. Shouldn't be too far behind other high tier adepts)

Range: Standard Melee Range. Several meters with attacks. Far higher with her Septima (Able to create illusions throughout the entirety of the garden)

Intelligence: Genius (Managed to hide the full extent of her Septima from even the likes of the Sumeragi Group, a powerful conglomerate who focus on detaining and controlling Adepts, and used it to infiltrate said group and become one of the highest-ranking members to obtain important information on Glaives and The Muse, in which she succeeded. Hid most of her identity even during her time at Sumeragi, which she became known for, and everyone who tried to figure out her schemes found out that several pieces contradicted each other. Was able to easily fake her death at the hands of Copen)

Weaknesses: Arrogant and sadistic to a fault, and tends to toy with her opponents. Her false form seemed to enjoy pain and dying, though this likely doesn't apply to her true self.