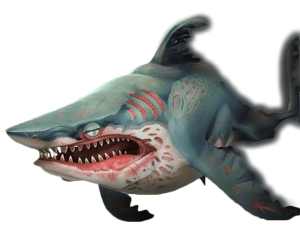 The Zombie Shark is the fifth Tier !! shark in Hungry Shark World. It's a zombiefied shark that bears resemblance to the Megalodon, though is a lot smaller and with many injuries along its body.

Speed: At least Normal Human (Can catch up to swimming Humans and should be comparable to real life sharks), higher via Boost and with items

Durability: Wall level (Should be as durable as the Megalodon and more durable than the Reef Shark)

Weaknesses: Can only zombiefy other sharks

Retrieved from "https://vsbattles.fandom.com/wiki/Zombie_Shark_(Hungry_Shark)?oldid=6550090"
Community content is available under CC-BY-SA unless otherwise noted.