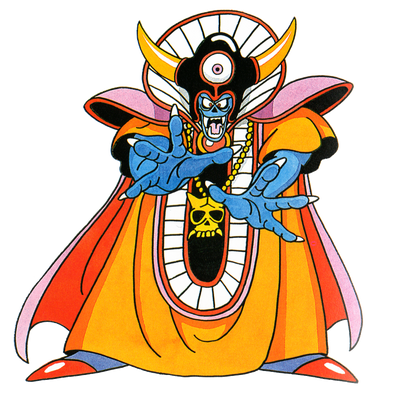 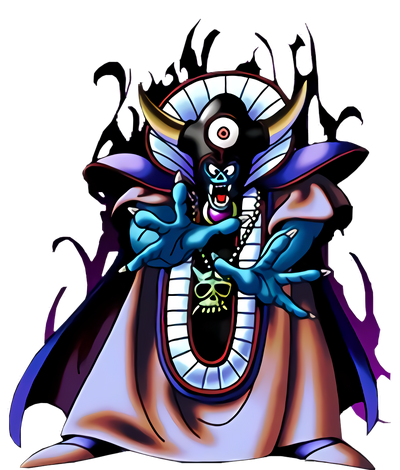 Zoma (ゾーマ Zōma) is the final boss of Dragon Quest III. He is a demon King who ruled over Torland, he sealed away the creator of Torland, Rubiss, and blocked much of Torland and kept only a continental landmass called Alefgard. Zoma then sent a being named Baramos to conquer the upper world. He was defeated by the hero of Dragon Quest III, who went to Alefgard. Zoma was finally defeated by this hero deep in the basement of his castle. However this fight was not easy, Zoma has a robe that makes him extremely powerful and resilient, the hero was forced to use the Orb of light to ward away its powers. Upon his defeat, the hero was given the title of the hero of Legend, Erdrick

Age: Ageless, a primordial being from the beginning of time in some form or another

Attack Potency: Low Multiverse level (Sealed away Alefgard from "all other worlds" shrouding it in darkness and defeated Rubiss, who created Torland. He is described by an oracle to be a fundamental dark analogue to the Goddess and is a wellspring of power who counteracts and clashes the Goddess' power of light. Should be comparable to Calasmos and fought Erdrick who is an incarnation of the Luminary of Dragon Quest XI, and was able to destroy the Sword of Kings albeit over the course of three years trying. The Sword of Kings was the Super Sword of Light which, when corrupted, could destroy Erdwin's Lantern which is a universe and the much weaker forged Sword of Light could destroy the Sphere of Time which contained all of history)

Speed: Massively Hypersonic+ (Faster than Rubiss, who is comparable to Malroth)

Durability: Low Multiverse level, higher with the Robe of Darkness

Intelligence: Very high, could foresee what will happen in later Dragon Quest games.

Weaknesses: Zoma is weak to holy magic and his power can be counteracted by holy relics such as the Sword of Kings or Sphere of Light