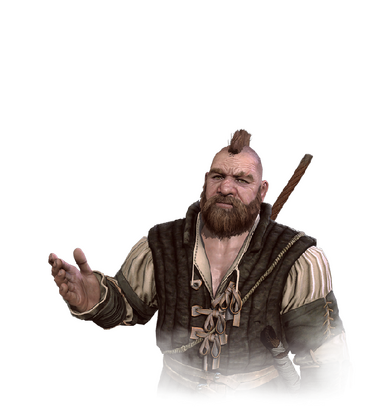 Zoltan Chivay was a veteran of the Second Nilfgaard War and a close friend of Geralt and Dandelion. They first met when Geralt and his company were going towards the Yaruga river from Brokilon, but the dwarf advised them to join his company and go eastwards. It is from Zoltan that Geralt got his sword - Sihil. A big-hearted, loyal and brave man, he's always open to help his friends.

Age: Unknown, probably around 65 years old at the end of The Witcher 3

Attack Potency: Building level+ (Somewhat physically comparable to Geralt, is capable of defeating Wild Hunt members on his own with just a knife and normally fighting them with his axe)

Lifting Strength: Class 5 (Can wield and swing massive hammers and axes with ease), possibly Class 25 (Can evenly arm wrestle with Geralt, and Geralt himself admit it that it wasn't easy)

Stamina: Very high (Fought for many hours during wars and after being injured)

Intelligence: Above average, a very experienced and skilled soldier who was through countless battles.

Retrieved from "https://vsbattles.fandom.com/wiki/Zoltan_Chivay?oldid=6054286"
Community content is available under CC-BY-SA unless otherwise noted.