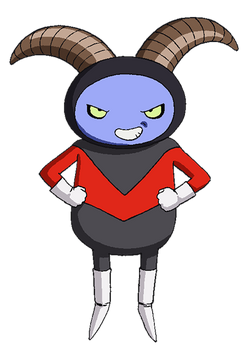 Zoiray (ゾイレー Zoirē) is a member of the Pride Troopers who participates in the Tournament of Power.

Powers and Abilities: Superhuman Physical Characteristics, Acrobatics, Martial Arts, Flight, Spaceflight, Self-Sustenance (Type 1), Chi Manipulation (Can be used defensively and offensively, to strengthen his skin or to fire ki blasts, which can home in on targets, and form defensive barriers), Resistance to Extreme Cold and Cosmic Radiations

Speed: At least FTL+ via Powerscaling (Can keep up with Tupper with the Double Justice Spin)

Retrieved from "https://vsbattles.fandom.com/wiki/Zoiray?oldid=6553216"
Community content is available under CC-BY-SA unless otherwise noted.