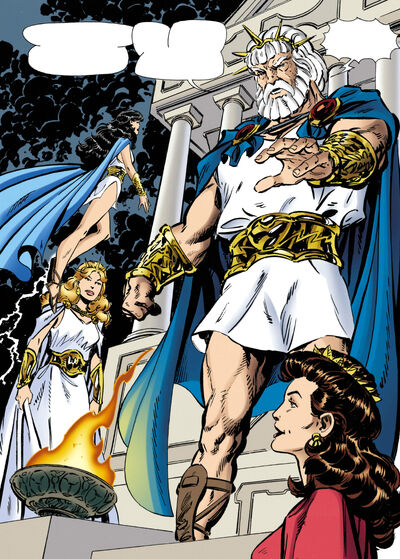 Zeus is the King of the Olympian Gods, and one of the most powerful Cosmic Entities in the universe. He is more often than not a neutral being, rarely interfering with mortal affairs and only acting if the threat proves great enough.

Zeus' origins and early history mostly conform to the way they are presented in classical mythology. He is a child of the Titans Cronus and Rhea and leader of the twelve Olympian Gods. During a war between the Titans and Olympians, Zeus slays his father and assumes his place as King of the Gods, ruling from Mount Olympus with his sister-wife Hera. He is the father of numerous gods and heroes, the most famous being Heracles.

Due to the machinations of the alien god Darkseid with the intent of weakening the Greek Deities, spreading tales of the Roman Gods across the world, led the Olympians to split into multiple aspects, with the Roman gods existing for a time as separate entities. Zeus' counterpart Jupiter rules his own Olympus in a separate dimension following this. The two pantheons are merged into single entities again centuries later.

In the New 52 Continuity, Zeus is the father of Wonder Woman.

Age: Hundreds of Thousands of Years Old | Beyond Time altogether

Attack Potency: Unknown, likely Universe level (Fought against, and defeated the universe creating Kane Milohai, while in the god's own dimension. When amplified with the powers of various deities, Zeus defeated the Shattered God, whose power was equal to the Big Bang's) | Low Complex Multiverse level (Much like other deities from the 4th World, he exists beyond time and space, and the whole Multiverse. Comparable in might to Highfather's True Form)

Intelligence: Immensely intelligent. Rules over the Olympians, holds vast knowledge on the Cosmos. A member of the Quintessence

Note: This profile covers Zeus at his peak, not accounting for all the times where he is weakened for one reason or another