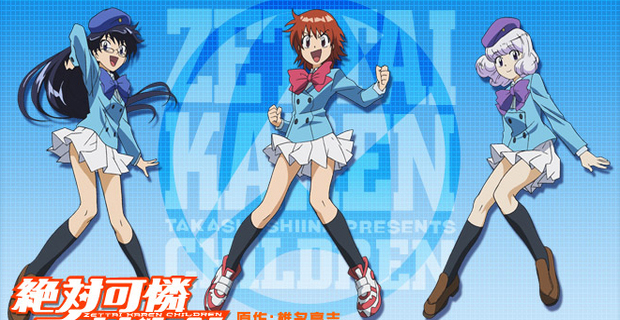 In the future, people with ESP are becoming more widespread, requiring training to be able to use their power for constructive purposes. Unfortunately, there are also espers that abuse their powers and wield them to destructive ends. The Japanese government's solution to both challenges is the establishment of the Base of Backing ESP Laboratory (B.A.B.E.L.) for the purpose of appraising, identifying, nurturing, and protecting espers (even if that means apprehending them as if they were criminals). Five decades later, B.A.B.E.L. locates a trio of natural Level 7 (the maximum esper potency designation) espers within Japan, and assembles them into the special esper team known as "The Children". However, all three have developed questionable attitudes because of the persecution and ostracization caused by the ignorant fear of their powers. Still, the question now becomes whether Kaoru Akashi, Shiho Sannomiya, and Aoi Nogami can be refined into young ladies.

Kōichi Minamoto, a 20 year-old prodigy is assigned by B.A.B.E.L. to the task of supervising The Children. As the series progresses, The Children and Minamoto must deal with several enemy organizations, each with conflicted views regarding the role of espers in the world, including "P.A.N.D.R.A.", a cadre of rogue espers determined to wage war against the rest of mankind, the "Black Phantom", a mercenary organization who brainwashes espers into living tools of destruction and the "Normal People", composed solely of non-esper individuals who view espers only as a threat to be vanquished.

The verse is full of ESPers (People with superpowers). ESPers can range between Level 1 (Almost not noticeable regardless of their ability since it's super weak) to Level 7 (Around Building level). People can have a single power like psychometry or psychokinesis, several abilities at once or they can have unique powers created from fusing several abilities to different extents.

It also has some decent hax like spatial manipulation which in some cases means that conventional durability can be ignored, future-sight (Though it isn't absolute) and even the ability to control the aging of their own body in order to look like a teenager despite being way over 70 years. The most impressive or flashy power is surely the application of Hypnosis and Illusions. Unlike other verses, Hypnotism and Illusions can be a very strong power ranging from binding a oppenent with non-existing snakes to transformation of simple cars into giant (5-10 meters) mechas, but it also appears as powerful common illusions by some ESPers.