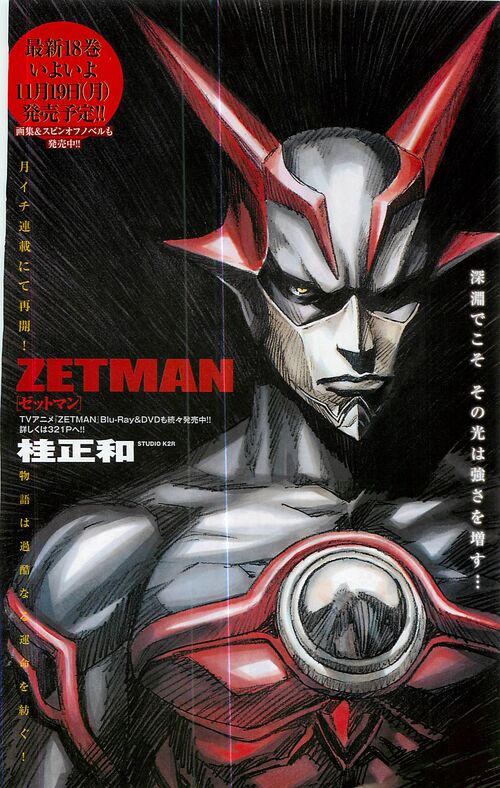 Zetman is a manga series created by Masakazu Katsura, premiering in Young Jump Magazine in 2002. it is also currently serialized there as well. It is a seinen series that tells the story of both Jin Kanazaki and Kouga Amagi, who combat the demonic 'Players', creatures created, and currently hunted, by the Amagi Corporation.

Jin was the last experiment conducted by scientist Gorou Kanzaki, who escaped from the Amagi Corporation when he found out that they intended to exterminate their creations. (However, Jin did not find out about his powers or his "grandfather"'s history until he was about twelve.) Though Gorou wished nothing more than for Jin to live out a normal life, Jin is pulled into combat as a teenager, upon realizing his powers as the eponymous Zetman.

Kouga Amagi is the intended heir of the Amagi Corporation and has long dreamed of becoming a superhero due to a childhood of cartoons and comic books. He eventually does just that using a variety of nifty gadgets, calling himself Alphas after his favorite childhood hero. The two protagonists are often found in opposition to one another due to their conflicting methods and personalities.

Retrieved from "https://vsbattles.fandom.com/wiki/Zetman?oldid=5294207"
Community content is available under CC-BY-SA unless otherwise noted.