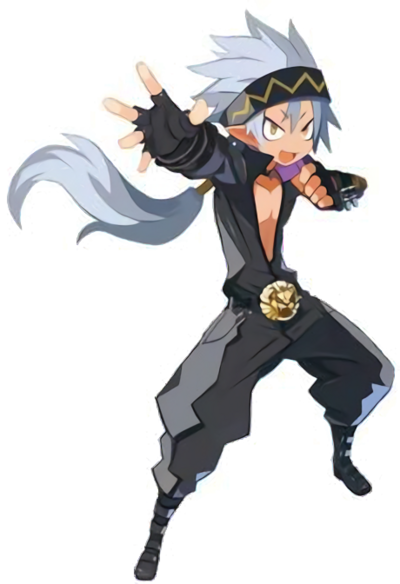 Zeroken is a diminutive werewolf who joined the Lost Army led by Void Dark after the latter destroyed Zeroken's native Netherworld. He was made to do menial tasks, but was eventually sickened by the Lost's treatment of their prisoners, including Void Dark's own father, Goldion, who taught Zeroken various techniques from his signature Ultimate Demon Technique combat style.

But the young werewolf fled in fright after watching Void Dark brainwash Goldion into becoming one of the Lost. Putting on a brave facade, he began attacking low-ranking Lost squads to try and repent for his cowardice until he met Killia's and Seraphina's Rebel Army. Although initially hostile towards them, learning that Killia had also been tutored by Goldion led Zeroken to join the Rebel Army and grow strong enough to enact vengeance against Void Dark.

Speed: Massively FTL+ via power-scaling (As an Overlord, Zeroken should be comparable to Overlord Laharl, who can dodge a beam that can envelop the Milky Way Galaxy in a thirtieth of a second, one of the fastest in the Rebel Army)

Lifting Strength: Class Z (Can easily rip the moon from its orbit) | Pre-Stellar (Capable of physically matching characters who can pull several giant planets towards themselves with relative ease) | Pre-Stellar (Same as before)

Stamina: Very high (As an Overlord, he can tear through scores of other demons without much effort)

Intelligence: As a student of Goldion, Zeroken is proficient in one of the most infamous martial arts styles in all the Netherworlds, being capable enough to hold his own against the Lost Army after some training with Killia and truly becoming an Overlord. Regularly sparring with Killia, he also helped refine and perfect the style's ultimate technique, becoming a truly fearsome martial artist. By the end of the game, he opened a dojo to help spread the technique's teachings, proving to be an extraordinarily effective teacher to the point that he quickly ran out of things to teach his students to his chagrin.

Weaknesses: Zeroken is somewhat meek at the outset of the game, but he has since gotten over this for the most part.