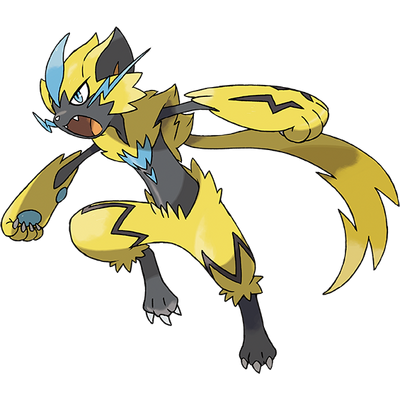 Zeraora is a Mythical Pokémon native to the Alola Region. Although it's unable to produce electricity on its own, Zeraora can absorb electricity from its environment to use Electric-type moves and create a magnetic field under its paws that allow it to tear its foes to pieces at the speed of lightning.

Speed: Massively FTL+ (Could keep up with Guzzlord)

Intelligence: Unknown. It is presumably a capable warrior and fearsome predator, going by its Pokedex entries

Weaknesses: Ground-type attacks, Those who routinely channel vast amounts of electricity, such as other Electric-type Pokémon, cannot be paralyzed by Zeraora's electric attacks. Zeraora does not possess the organs required to produce electricity, forcing it to absorb electricity from its environment to use its most powerful electric attacks