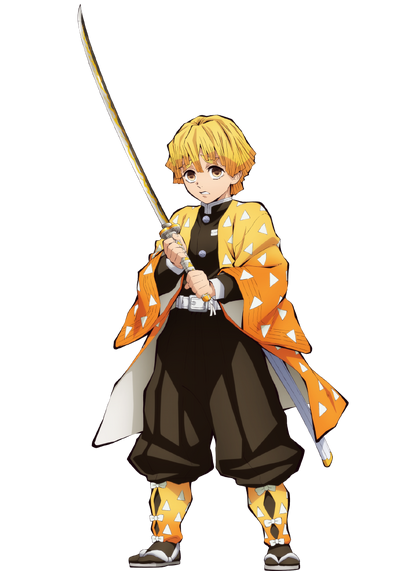 Zenitsu was saved from being in debt by his master, Jigoro Kuwajima, who taught him the Thunder Breathing style. Zenitsu was offered to split the successor-ship with Kaigaku, Jigoro's other student, since neither of them were able to learn all the moves of Thunder Breathing but Kaigaku refused and was disgusted by Zenitsu. After surviving Final Selection, Zenitsu met Tanjirou on the side of a road while trying to get someone to marry him. The two were called forth to work on a mission together and thus Zenitsu's true journey began.

Resistance to Fire Manipulation, Water Manipulation, and Heat Manipulation (Demon Slayer Corps Garbs protect against fire, water and cold), Fear Manipulation and Paralysis Inducement (Resistant to aura of Lower Moons and other Upper Moons that can induce fear and paralysis like Muzan's aura but on much lower level)

Stamina: High, can fight for a long time and endure spider poison for some time

Intelligence: Above average (Created his own Form within the Breath of Thunder Style)