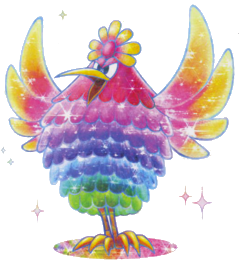 The Zeekeeper is the guardian figure of the Pi'illo Kingdom, who helped them take down Antasma many thousands of years before the events of the game. His name is derived from the word "beekeeper" through a combination of the American English phonetic spelling of the letter Z, which symbolizes sleep, and the word "keeper", referring to his status as a guardian. Initially appearing to be a serious deity with a formal speaking tone during his confrontation against the Mario Bros., he's actually greedy, laid-back, and down-to-earth. However, he still proven to be very wise and have a good heart.

Age: Over thousands of years.

Attack Potency: Multiverse level (Defeated Antasma, who was wielding the Dark Stone and destroyed the barrier of Neo Bowser Castle which was powered by the Dream Stone. The Dream Stone is composed of countless dreams and each dream is an entire world of it's own. The Dark Stone is the nightmare equivalent of the Dream Stone)

Speed: Massively FTL+ (Much faster than Giant Luigi, who was able to jump into space and grab a star in a few seconds and have to keep attacking him to slow him down)

Stamina: Limitless (Shows no signs of being hurt or tired after his fight with Giant Luigi and considers his last battle with Antasma a mere nuisance)

Range: Multiversal (Reality warped a dream world during the battle against Giant Luigi)

Intelligence: High (Despite being laid back, he still proven to be wise, lecturing the inhabitants of pi'illo kingdom about reliance in objects)

Weaknesses: The Zeekeeper is quite lazy and due to not using it for a long time, firing the Wake Beam makes him drastically tired.