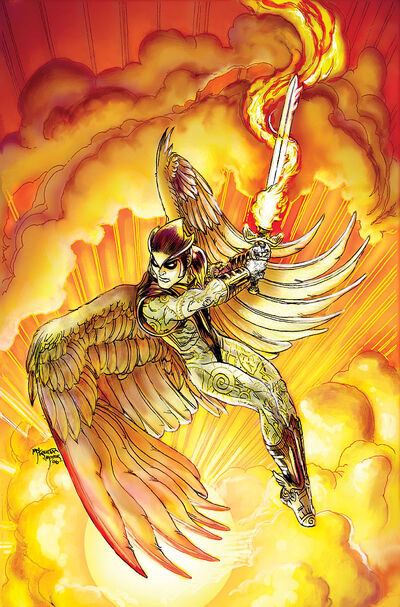 Zauriel was an angel of the Eagle Host, one of the four hosts of Heaven (Eagle, Human, Bull and Lion). Since the dawn of creation, Zauriel served The Presence (God) as a guardian angel, protecting the souls of countless women, including Cleopatra, Mona Lisa, and Joan of Arc. He later falls in love with one of his assignments, a woman with a boyfriend from San Francisco. At about the same time, Zauriel learns of the secret plans of Asmodel, King-Angel of the Bull Host and one of the main generals of Heaven's armies. He and a legion of Bull angels were attempting to succeed where Lucifer failed by overthrowing The Presence. Descending to Earth in a mortal form, Zauriel teams up with the rest of the Justice League to defeat Asmodel and his army before being forced to defeat him alone in Heaven later on. Afterwards, he renounces his own immortality to live a life as a mortal angel on Earth, becoming a member of the Justice League and protecting mankind. Zauriel was created by Grant Morrison, Mark Millar, Howard Porter, and John Dell, and first appeared in JLA #6 in 1997.

Classification: Fallen Angel of the Eagle Host, Former Member of the Justice League

Powers and Abilities: Superhuman Physical Characteristics, Flight, Weapon Mastery, Magic, Enhanced Senses (Zauriel has a divine connection to the flow of magic on Earth. He can also sense good and evil around him and in people), Non-Physical Interaction (Can cut intangibles and even dimensional fabric with Michael's Sword), Sonic Scream (can match the vibrational frequency and disintegrate almost anything ), Angelic Over-Mind (allows direct connection between Heaven and Earth and communication with all animals) Telekinesis (powerful enough to split the Red Sea), Self-Sustenance (Types 1, 2, and 3; Does not need to eat, drink, sleep or breathe), Dimensional Travel, Regeneration (At least Low-Mid; seemingly regenerated from being shot through the chest by Superboy-Prime's Heat Vision), and Immortality (Type 9; His true self exists in Heaven, an eternal realm that exists outside of the DC Multiverse)

Attack Potency: Solar System level (Defeated Asmodel, a being who defeated Martian Manhunter. Can disintegrate other angels with his Sonic Scream)

Speed: Massively FTL+ Combat and Flight Speed (Should be comparable to Martian Manhunter and Superman)

Durability: Solar System level (Withstood blasts from Asmodel who fought evenly with Superman for a time)

Stamina: Infinite (draws his power from Heaven itself and doesn't need to eat, drink, sleep, or breathe)

Standard Equipment: Heavenly Armor (enhances his physical capabilities and protects from magic), Flaming Sword (can fire blasts of holy fire, cut intangible beings such as ghosts and spirits, and cut through dimensions), The Aerie (a floating base of operations gifted to him by Heaven), Michael's Battle Spear (the same spear Michael the Archangel used to defeat Lucifer Morningstar)

Intelligence: Extraordinary Genius. Zauriel is extremely knowledgeable of magic and religions from all over the world and well-versed in all languages known across the universe. He is capable of multi-tasking and can interact with information at a multitude of levels. He claims that he also possesses a level of "higher consciousness" that is constantly watching the environment at a spiritual level.

Retrieved from "https://vsbattles.fandom.com/wiki/Zauriel_(Post-Crisis)?oldid=6543648"
Community content is available under CC-BY-SA unless otherwise noted.