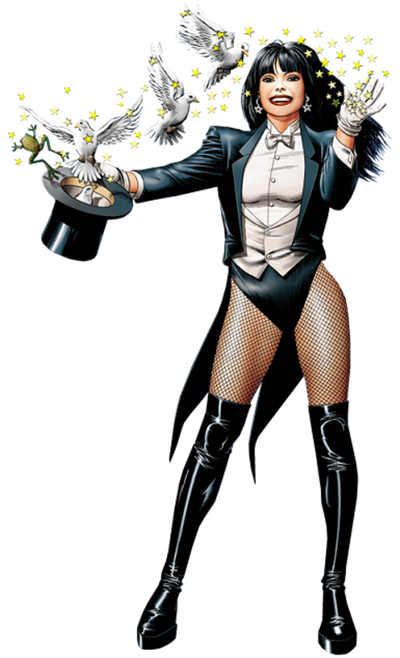 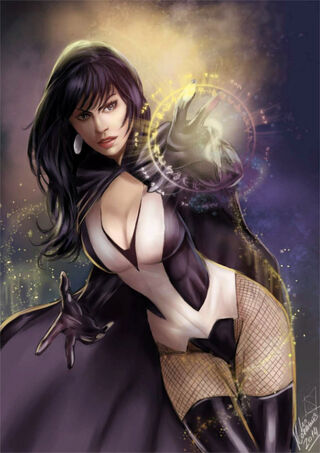 Zatanna is a superhero and one of the greatest magic-users in the DC Universe. Daughter of the great magician Giovanni “John” Zatara and Sindella, a member of the mystical Homo Magi race. Zatanna is a direct descendant of the artist and magician Leonardo da Vinci, and is related to Nostradamus; Alessandro Cagliostro; the noted alchemists Nicholas Flamel and Evan Fulcanelli; and Lord Arion of Atlantis.

The traditional method of spell-casting she uses involves speaking words and sentences backwards. In addition to her career as a hero, she is also a very notable stage performer. She has been a member of the Justice League of America, the Sentinels of Magic, and the Seven Soldiers.

Tier: 9-C physically. Unknown, possibly 4-B at her peak with magic | Low 2-C, possibly higher | 4-B, possibly far higher at her peak

Age: Probably in her 30s

Attack Potency: Street level physically. Unknown, possibly Solar System level at her peak with magic (Has been stated to be the strongest member of the Justice League. Has defeated Lobo, Despero and Mary Marvel) | Universe level+ (Manipulated space and time to command the Seven Soldiers), possibly higher (Fought and defeated Zor, one of the Time Tailors who was powerful enough to contend with an extremely inexperienced Jim Corrigan) | Solar System level (Comparable to most High-level Superhumans, such as Aquaman and Green Lanterns), possibly far higher at her peak (Was capable of escaping Nanda Parbat)

Intelligence: High. Zatanna is one the most skillful magicians in the world, with a vast understanding of the occult and the mystic. Skilled hand-to-hand combattant.

Weaknesses: Physically just a human, depends on barriers and shields to defend herself

Effortlesly generated a year's worth of Solar Luminosity in one second

Survived a punch from Wonder Woman

Established a hole in the fabric of Space-Time

Was capable the Justice League Dark away from Nanda Parbat, even though it could have "shattered the walls of reality"