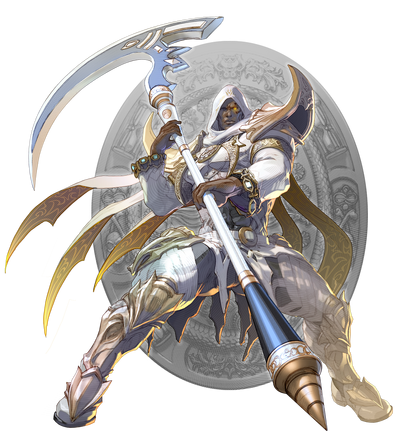 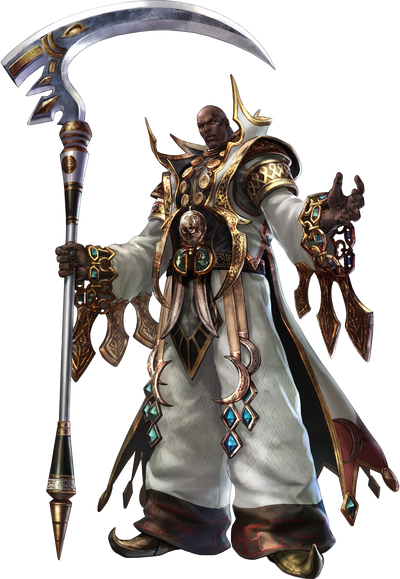 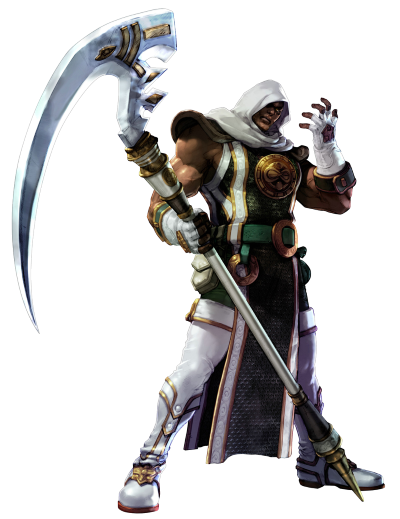 Zasalamel is a character in the Soul series of fighting games, a man with no allegiances except to himself, though his actions may reasonably be defined as evil.

Superhuman Physical Characteristics, Darkness Manipulation, Void Manipulation and Dimensional BFR via Gate of Meslam, Gravity Manipulation, Energy Manipulation, Immortality (Type 6. When killed, he would be reborn into a body that would grow up to be identical to his orginal body. Even having his soul absorbed by Soul Edge couldn't permanently kill him), Dark Magic, Flight, Summoning, Illusion Creation, Telekinesis, Absorption (Absorbed the essences of Soul Edge and Soul Calibur), Regeneration (High-Mid. Was able to regenerate himself after being blown to small particles), Enhanced Senses, Extrasensory Perception, Resistance to Mind Manipulation and Madness Manipulation (Can be around Soul Edge's power and not be driven mad).

All previous abilities including those from Irkalla, Soul Manipulation (With the power of Soul Edge. Can rob the souls of entire armies at once. Deals Soul Damage with each of attacks, stealing the soul of his opponent slowly during combat), Mind Manipulation (With the power of Soul Edge. Can manipulate the minds of others. If there is a malfested target, Soul Edge feeds off of their sinful actions of bloodlust and gains the ability to control them), Dimensional BFR (Can send others to Astral Chaos. All Souls taken by Soul Edge are sent to Astral Chaos. Astral Chaos warps and corrupts all who enter, mind, body and soul, eventually driving them mad and turning them into a form of Malfested), Duplication, Light Manipulation, Necromancy, Madness Manipulation (Type 2; Simply being in contact with its power is enough to drive one into madness. Can corrupt entire areas making it so that anyone who enters the area will be driven mad), Curse Manipulation, Corruption (Can turn those who come into contact with it into mindless Monsters, Vampires, Malfested, etc. Even sustaining injuries from him or any wielder of Soul Edge is enough to drive one insane as shown with Raphael whose body became corrupted by his wounds. Coming into contact with a malfested's blood can in fact infect another as shown when Amy became malfested by treating Raphael's wounds), Sealing, Reality Warping, Can cut through dimensions, Teleportation, Fire Manipulation, Ice Manipulation, Passively draws energy into the Abyss as well as always pulling his opponents toward him while damaging them, Resistance to Sealing

heals himself each time he damages the opponent with Mrtyu, Passive Statistics Amplification (Boosts his Attack Potency and Durability at the start of his fight. His Attack Potency however gradually rises over the course of the fight) and Poison Manipulation via Irkalla.

Attack Potency: Mountain level (Defeated Kilik and capable of fighting both Nightmare and Siegfried) | Mountain level (Via this calc) | Large Town level+ (Fought the likes of Geralt who is comparable to Mitsurugi)

Intelligence: Numerous lives worth of wisdom. Can fight the likes of Nightmare, Siegfried, Ivy and many other characters and match them in skill if not surpass them.

Weaknesses: None notable | Is blinded with an unending rage.

Gate of Meslam: Zasalamel knocks his opponent back and starts drawing a symbol in the air. A void appears behind the opponent and Zasalamel throws them into it, shouting "Vanish into the void!", and ending his Critical Finish with a "Goodbye!"

Note: Some of Zasalamel's abilities come from the various weapons he can equip. As such, in battle the creator should specify what weapon(s) he is allowed to have. 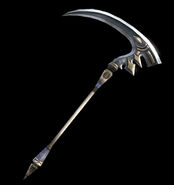 Critical Finish
Add a photo to this gallery