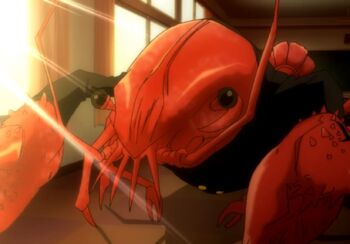 Zarii is a AA-Class crayfish Megalo from the Underworld who has already killed six Masou Shoujos. He came to Earth to kill Masou Shoujos to consume their energy. He faces Ayumu Aikawa in battle and is defeated, though with trouble.

Speed: At least Subsonic+ combat/attack speed (Faster than Masou Ayumu; its pincers fly at the speed of a rocket)

Stamina: On par with Ayumu

Retrieved from "https://vsbattles.fandom.com/wiki/Zarii?oldid=5662710"
Community content is available under CC-BY-SA unless otherwise noted.