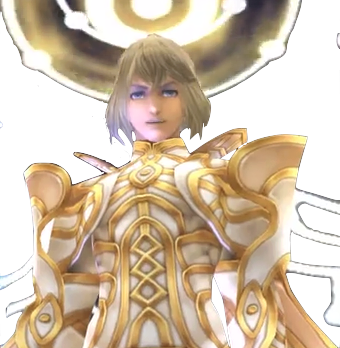 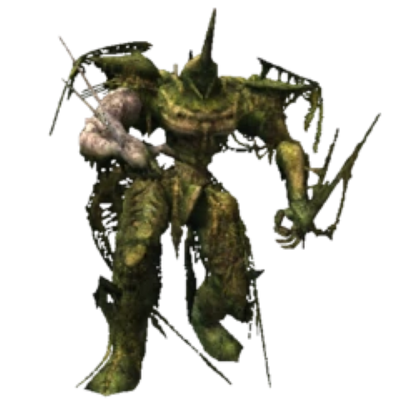 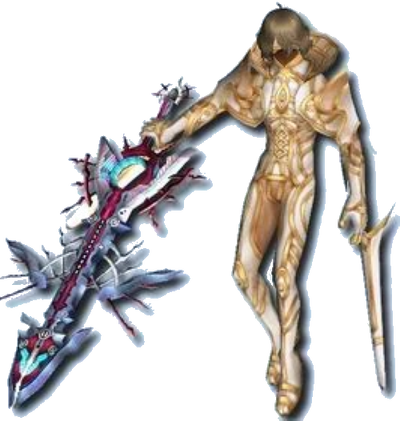 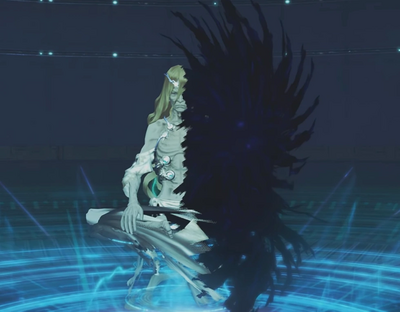 Zanza (Japanese: ザンザ; English dub: /ˈzæn.zə/), originally a human named Klaus and referred to by his venerators as Lord Zanza, is a central character and the true antagonist in Xenoblade Chronicles. He existed before the creation of the game's universe. Long before the events of the game, Zanza possesses Arglas, a Giant from Bionis, who is subsequently confined by the High Entia on Prison Island. He reveals himself to be the creator of the Monado to Shulk and his party. He is one of the two original Gods of the Xenoblade Universe.

Name: Klaus, Zanza, The Bionis, The Architect (God of Creation in the Japanese version)

Age: At least thousands of years, likely billions of years (He has recreated the universe of Xenoblade many times in the past according to Alvis, and was also stated to have lived and battled with Meyneth "Before time began")

Classification: Human before the events of the game, later a god

Same as before, except Non-Corporeal and Large Size (Type 4), plus Flight, Shapeshifting, Possession, Teleportation, Energy Projection, Forcefield Creation, Power Nullification, Paralysis Inducement and Perception Manipulation (Wields the same Monado that Shulk had, which has Monado Purge), Air Manipulation (Via Monado Cyclone), Summoning (Can summon Zanza guardians to aid him), Non-Physical Interaction (Killed Meyneth's soul), Soul Manipulation (Can control the spirits of the foes his opponent has previously fought in his pocket universe), Portal Creation and Dimensional Travel (Can Create Portals between Memory Space and the Bionis/Mechonis), Biological Manipulation (Can turn the High Entia into Telethia), Statistics Amplification, Status Effect Inducement, Healing, Regeneration (Low-Mid), Black Hole Creation and Durability Negation (Via Black Hole inflicting Pierce), Transformation and Large Size (Type 0), Reality Warping, Precognition, Clairvoyance, and Cosmic Awareness (The creation of Memory Space gave Zanza the ability to see the passage of Fate, is also the one granting Shulk his visions throughout most of his journey. The Architect is also well aware of the existence of an "Endless number of universes" that are equal to the "Infinite number of possibilities"), Resistant to the following: Fire Manipulation, Ice Manipulation, Poison Manipulation, Paralysis Inducement, Bind, Sleep Manipulation, and Power Nullification (Due to gaining Shulk's body and form, he'd gain the same resistance as his host body)

Speed: Sub-Relativistic (Via sheer size) | Infinite (Lived "Before time began" and flew and battled Meyneth in the Chaos) | Infinite

Lifting Strength: At least Class E (His sword is this big) | Infinite | Infinite

Stamina: Nearly Limitless, likely Limitless with the Conduit (The Conduit is an infinite energy Perpetual Motion engine stated to grant unlimited power from a far-flung dimension)

Intelligence: Extraordinary Genius. Professor Klaus was the greatest scientist in Rhadamanthus and was the one who understood the Conduit's power more than anyone. It was his research that found the way to control the Conduit's power using the Trinity Processor and was implied to be the one who created the three core crystals. He was also the one who used the Conduit to create and destroy entire universes as well as transform human beings such as himself and Galea into Gods such into The Architect/Zanza and Meyneth respectively. Has grown much wiser developing Cosmic Awareness due to this experiment.

Weaknesses: If he suffers too much damage, he will be forced into hibernation | Overconfident, can't see the future if he is fighting someone with equal or greater levels of Cosmic Awareness, Shulk for example. The Architect is a pacifist by nature and longs to see his own demise; the Architect will die if his other half/Zanza is slain.

Zanza final form.
Add a photo to this gallery