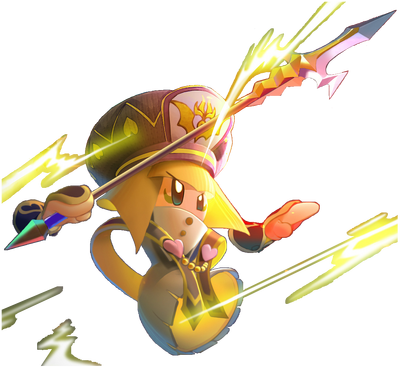 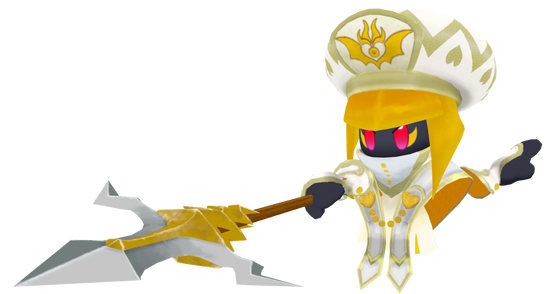 Zan Partizanne is one of the Three Mage-Sisters and their leader, who are ruthless generals & priestesses in the Jambastion cult and members of it with a high position. Prior to this, when she was a girl, she "lost all" and climbed a tall tower for presumably distressing reasons, only to be struck by lightning. Before dying, a stranger called Hyness appeared and unlocked her natural talent for lightning magic, saving her. She would then be adopted as part of his family and incorporated in his crazy belief system, developing their dark arts and combat skills among her little "sisters" Francisca & Flamberge. She cherishes them and Hyness, despite the latter being overcome by darkness and giving her a poor treatment. Her organization would eventually come in terms with the universe after Hyness was purified, with the Mage-Sisters being able to be seen as allies. She also has a silly gimmick where people doesn't remember her full name due to being too complicated.

Superhuman Physical Characteristics, Non-Physical Interaction (Can affect Void Soul), Self-Sustenance (Type 1), Likely Breaking the Fourth Wall (Featured as an avatar on the Japanese Kirby 25th Anniversary Twitter account, in which she explains things to the public), Toon Force, Regeneration (Mid. Like all Star Allies, she can quickly recover from being crushed flat, as well as from being impaled by allies or by Flamberge's Barbecue Party), Immortality (Type 3), Vehicular Mastery, Magic, Flight, Summoning (Can summon her partisan and thunder drums. The Three Mage-Sisters summoned the Warp Star at the end of Heroes in Another Dimension, which doesn't appear for Kirby and allies in the bad ending), Weapon Mastery, Electricity Manipulation, Can stun opponents with her partisan, thunder drums and other electric attacks, Can summon a cloud that strikes lightning, Can turn into a small ball of intangible energy, Resurrection (Able to revive others via Revival Spell), Empathic Manipulation & Morality Manipulation via Friend Hearts (Can turn enemies into allies. Able to overwrite Void Termina's effects on allies; Scales to his multi-galactic potency), Healing & Purification (Friend Hearts can be used to heal and purify others. Can "Revive" defeated allies, who are merely unconscious), Cloth Manipulation, Power Bestowal (Turning targets into allies gives them that same power. Can bestowal electric powers to others), Creation (Able to help other Star Allies create Friend Stars and the Star Allies Sparkler), Resistance to Morality Manipulation & Empathic Manipulation (Unaffected by the presence of the individual Jamba Hearts. Even after Kirby used an amped Friend Heart on the Mage-Sisters, which was notably done after having them defeated and unconscious, they weren't under the effects of extreme happiness and affection towards Kirby & allies, instead barely collaborating with them), Transmutation (Like all Star Allies, she isn't transmuted after being cooked inside Chef Kawasaki and Cook Kirby's pot, a process that regularly turns foes and items into food), heat and cold (Unaffected by the temperatures of Blizzno Moon and Star Lavadom), Black Holes (Able to outrun and withstand black holes from Marx)

Attack Potency: Multi-Solar System level (Fought Kirby & 3 Star Allies as superior to King Dedede and Meta Knight under the influence of Jamba Hearts, whose powers were boosted to the point of making them fight longer with their influence than what they could on their own. Superior to Francisca and Flamberge. Inferior to Void Termina as her power was used as a small fraction of what it took to revive him) | At least Multi-Solar System level (Received an increase in power and, while teaming up with the retaliators Francisca & Flamberge, they fought Kirby & 3 Star Allies as superior to Corrupt Hyness) | At least Multi-Solar System level (As before. Can assist Kirby & 2 fellow Star Allies in the defeat of Void Termina, Corrupt Hyness, the retaliators Three Mage-Sisters [at once, including herself], Morpho Knight EX and the stronger incarnations of Void Termina), able to negate durability with Friend Hearts

Speed: Massively FTL+ (Initially comparable to Kirby and the Star Allies, which includes characters such as Meta Knight, King Dedede, Bandana Waddle Dee, Gooey and Ribbon. Comparable to Francisca and was tasked with her same mission to find the dark hearts that rained down across the "galaxy" and bring them to Hyness. Can become a member of the Star Allies herself and be contend equally with Morpho Knight and Void Termina. Along with other Star Allies, she can chase and keep up with the Jamba Hearts several times, which were suddenly scattered across the universe)

Intelligence: As a general and leader of the three Jambastion mages, presumably high (Multiple Jammerjab are part of the Jambastion cult, Zan Partizanne is their superior). Possesses vast combat skills due to being able to contend with, and defeat, Hyness, and Void Termina

Weaknesses: Water and "Artist's paint attacks" (Attacking her with moves of such element types may stun her when she was performing certain electricity-based attacks). Her loyal character allows her to prioritize the safety of her master above her own

Heals all of her health when eaten.

Heal varying amounts of her health.

When collected, Zan Partizanne becomes invincible for a short time, and almost any enemy she touches will be instantly defeated, or at least damaged.

When used, Zan Partizanne summons one of the following Dream Friends to assist her:

The Final Weapon in Star Allies, used to take out Void Termina. The Star Allies Sparkler fires projectiles from the tip, fly around quickly and efficiently, and spin counterclockwise to avoid all damage on a relative scale (Sparkler Turn). Kirby canonically took the lead in the center of the Sparkler while his friends rode in the tail. Still, the leader can be rotated to imbue the shots with a different element depending on the leader (the technique is called Rider Switch). The Sparkler can fire different homing projectiles with varying power depending on charge time. An uncharged shot is called the Sparkler Comet, and it fires a star-shaped projectile. A charged shot is called the Sparkler Starshot, and it fires a projectile shaped like two intertwining stars. The strongest attack is called Team Star Allies!, which, if everyone who's riding charges together and releases at the same time, fires a giant laser at the opponent. Zan Partizanne uses this item on her own when used in The Ultimate Choice of Star Allies.

Used to increase her statistics. The effects are shared with allies. 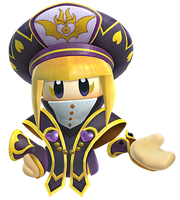