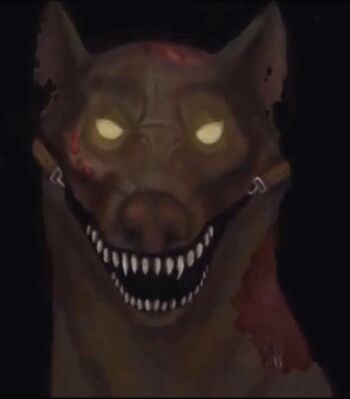 Zalgo came to this dimension after destroying the dimension belonging to the Der Ritter. He is the archenemy of Slenderman, leading an opposing army against him.

Age: Unknown, was alive before man was a species

Powers and Abilities: Superhuman Physical Characteristics, Telepathy (Can read the minds, learning the greatest desire and wants of the individual. He can also learn personal information on the target), Elemental Intangibility (Can become an inky/blood-like substance, is made of shadow, can become mist), Avatar Creation (Not combat applicable), Transmutation (Turned water to blood), Light Manipulation, Darkness Manipulation, Shadow Manipulation, Teleportation, Minor Technology Manipulation (Can cause electronics to flicker out of control), Body Control (Extra limbs and body part can protrude from Zalgo at will), Possession (Is shown being able to possess his disciples, as well as humans), Smoke Manipulation (Can create fog/smoke with his mere presence), Pain Manipulation (Caused Cory to feel intense pain, just by willing it), Body Puppetry (Caused the body of Cory Jarvis to contort in ways impossible for normal humans on a whim), Corruption (Types 1, 2, and 3), Dream Manipulation (Can cause horrific and prophetic nightmare), Skilled Manipulator, Power Bestowal (Gave Eyeless Jack the powers he has, increased Jeffery's strength as Torn Flesh, etc), Necromancy, Resurrection (Of others), Large Size (At least Type 0 in giant beast form), Immortality (Type 1 and 5), Summoning (Can summon followers of himself; should be comparable to Eyeless Jack), Status Effect Inducement (Can make a target incapable of harming or attacking a being of his choice), Shapeshifting (Constantly changes his form), Enhanced Senses (Depending on his form), Precognition (Can see future events, not combat applicable), Illusion Creation (Can cause vivid hallucinations), Fear Manipulation (His presence causes panic an anxiety in some humans), Madness Manipulation (Type 2; Drove a family to the point of insanity), Telekinesis (Can lift objects, cause doors to slam, etc. without being near them), Insect Manipulation (Can control beetles that feed on corpses), Magic (Powers stem from dark magic), Transformation (Can transform between a worm, demon, and various other forms), Biological Manipulation/Healing (Promised he would cure Cory's alopecia areata), Blood Manipulation (Can create and manipulate blood), Soul Manipulation (Can claim and take human souls), Resistance to BFR (Should be comparable to Eyeless Jack, who very briefly resisted being "BFR"ed by Slenderman, finding his efforts "amusing")

Attack Potency: At least Wall level (Is superior to Jeff. Can casually crush a skull), likely higher (Destroyed the Der Ritter's reality. Plans to kill Eyeless Jack when he rules the world)

Note: Feats from the Verse

Start a Discussion Discussions about Zalgo (Jeff the Killer Saga)