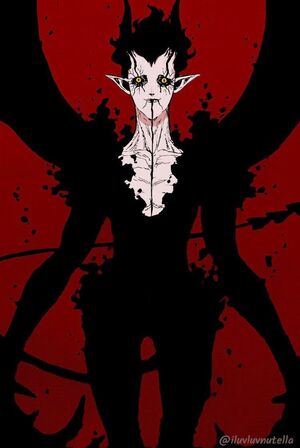 Zagred 「ザグレド Zagredo」 masterminded the corruption of Licht's grimoire into a five-leaf grimoire, the human royals' plot to kill the Elf Tribe and steal their mana, and the reincarnation of the elves. He possesses the reincarnated Baval then Ronne to oversee Patry completing the ritual to summon a body from the underworld. He uses Kotodama Magic, a magic attribute that allows the user to manipulate their surroundings through speech.

Powers and Abilities: Superhuman Physical Characteristics, Enhanced Senses, Acrobatics, Extrasensory Perception (Can sense other people's Mana), Magic, Aura (Yami described his mana as completely other class), Corruption (Possesses a five-leaf grimore. It used to be a four-leaf grimore that belong to Patry's before it was corrupted), True Flight, Non-Corporeal/Immaterial (Without the physical body he created, he appears as a soul or a ghost.), Possession (Zagred is capable of possessing the bodies of others, including elves and humans), Immortality (Types 2, 3 and 6. Can survive fatal damage done to his body and heal himself using magic. He can also leave a possessed body to possess another), Weapon Mastery, Soul Manipulation (Zagred can suspend the souls of the dead, so that they may be reincarnated centuries later), Kotodama Magic allows him for the following: Weapon Creation, Summoning, Regeneration (At least High-Mid, likely higher. As long as a part of him is intact, he can simply grow a mouth and use his Kotodama Magic to regenerate himself), Fire Manipulation (Wave of Flame), Earth Manipulation (Earth Shield), Life-Force Absorption/Magic Absorption, Electricity Manipulation (Lightning "Lance"), Danmaku ("Storm of Blades."), Spatial Manipulation, Forcefield Creation ('Vaccum Wall'), Attack Reflection (Can redirect Licht's attacks with a speech), Reality Warping, Telekinesis ('come here'), Creation With his Kotodama Magic, Zagred can create anything magical or non-magical, cursing peoples, inducing pain and even copy people's abilities), Portal Creation/Animal Manipulation (Furiously, he opens more mouths on his body to summon multiple portals with various monsters pouring out in an attempt to destroy the entire Shadow Palace), Mind Manipulation, Power Nullification (Can destroy energy with 'Iron Spear), Resistance to Passive Deconstruction (Wasn't even a bit affected by Yuno's power that causes his surrounding's to disintegrate) and Heat Manipulation (Via Mana Skin)

Attack Potency: Large Island level+ (Makes up 1/2 of Demon Licht's power, who was about to completely destroy the Clover Kingdom) | Small Country level (Became much stronger than before after gaining a body, Stated to be a high ranked Demon, which likely puts him above Demon Licht)

Speed: FTL (Can keep up with Asta)

Stamina: Incredibly high. His mana is even greater than the strongest Nobles and Elves. Yami stated that his mana leagues in another class and easily surpasses Nozel's and even Licht's

Intelligence: Genius, likely Extraordinary Genius. Zagred masterminded the corruption of Licht's grimoire into a five-leaf grimoire, the human royals' plot to kill the Elf Tribe and steal their mana, and the reincarnation of the elves

Weaknesses: He can't kill someone by saying death wishes with his Kotodama Magic. His Magic can't command spells that affect his world's or draws power from his world (i.e. another Demon Magic spell or Forbidden Magic spell)

Kotodama Magic 「言霊魔法 Kotodama Mahō」: Zagred uses this magic attribute to alter his surroundings through speech and to manifest physical and magical objects. While using Patry's grimoire, Zagred is able to summon various monsters from the underworld that absorb normal magic and lifeforce. He can also summon a special trident that dismantles anything it touches and distorts the space around it.