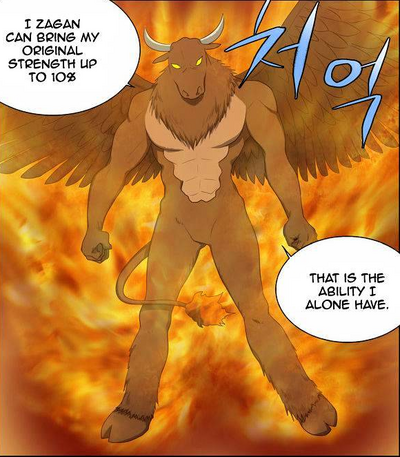 Powers and Abilities: Fire Breath Attack, Flight, Expert at Martial Arts, Immortality (Type 1, 3, and possibly 8 (May have immortality reliant on followers similar to the Arc Company)), Fire Aura, Regeneration (Mid-Low, likely Low-Godly over time. Immortals are described to have the weakness of being possible to kill if their soul is destroyed, implying that normal destruction is not enough to kill them), Likely Soul Manipulation (Should share this ability with fellow demons such as Berith), Resurrection (Once defeated, dissolves into a black mist and presumably returns to hell until summoned again)

Intelligence: Expert martial artist, recognizes many just by seeing them. However, he is extremely bloodlusted, and doesn't seem very book smart.

Weaknesses: Can only use up to 10% of his power outside of hell, if he goes into the real world he will be killed by Gaia's will.

Start a Discussion Discussions about Zagan (The Gamer)