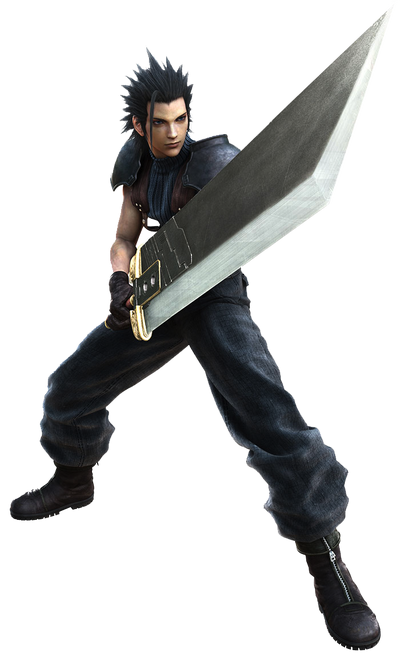 Zack Fair is a non-playable character in Final Fantasy VII and the main protagonist of its prequel, Crisis Core -Final Fantasy VII-. The second wielder of the Buster Sword before Cloud Strife, Zack received the Buster Sword from his mentor Angeal Hewley. Zack is a 1st Class SOLDIER and is Cloud's best friend during their time working for the Shinra Electric Power Company.

Zack, assumed to have been born in the town of Gongaga, had childhood dreams of joining SOLDIER to become a 1st Class. At the age of thirteen, Zack left Gongaga without telling his parents and joined the Shinra's military forces.

By October of 0000, Zack had reached SOLDIER 2nd Class under the tutelage of SOLDIER 1st Class Angeal Hewley. Angeal's words of wisdom and strong sense of honor had a profound effect on Zack, who wanted to emulate his mentor. During his time in SOLDIER, Zack befriended 2nd Class SOLDIER Kunsel, who guided him in the ways of Shinra. Zack works under Director Lazard Deusericus in the 49th Floor of Shinra Headquarters, along with many other SOLDIER members.

Powers and Abilities: Superhuman Physical Characteristics, Magic, Summoning, Master Swordsmanship, Expert in Hand to Hand Combat, With the DMW can copy and adapt the Limit Breaks of other characters upon meeting them and is thereafter able to perform those Limit Breaks as his own (Chain Slash, Octaslash, Rush Assault, Air Strike, Lucky Stars, Healing Wave, Meteor Shots and Apocalypse), Potentially possesses the likes of Elemental Manipulation (Of the fire, lightning, ice, wind, and earth variety), Healing and Regeneration (Mid-Low), Poison Manipulation, Petrification, Barrier Creation, Time Manipulation, Soul Manipulation (With Death Materia), Energy Blasts (In the form of Ultima and Flare), Gravity Manipulation, Durability Negation, Death Manipulation (Can instantly kill his foes with the Death spell), Resistance to Sleep Inducement, Paralysis, Silence, Confusion, Transmutation, Size Manipulation, Petrification, Mind Manipulation, BFR, Death Manipulation, Poison Manipulation, Time Manipulation, and Time Stop (By equipping one of the Ribbons made by Aerith or by slotting materia into his armor, Zack gains a variety of resistances to the status effects inflicted by various magical spells present in the series)

Speed: Massively FTL+ (Capable of keeping up with Bahamut Fury and dodging parts of its body that were fired at him)

Durability: Solar System level (Comparable to the likes of the Genesis Avatar by the end of Crisis Core)

Stamina: Extremely high (Zack is very energetic, he can fight for a long time without being exhausted, Zack was taken down by a massive army sent by Shinra, he was heavily wounded, and he was still fighting, but after a while, he was defeated and lost his life as well)

Range: Extended melee range, much higher with magic and summons.

Intelligence: A master swordsman who clashed with all three Legendary SOLDIERs and successfully defeated Angeal and Genesis. A 1st Class SOLDIER, Zack has access to a wide variety of skills and magic through his mastery of Materia. He also skilled in hand-to-hand combat, defeating Shinra's battalions of foot soldiers with nothing but his hands due to leaving the Buster Sword with Cloud as a shield against bullets.