VS Battles Wiki
Register
Don't have an account?
Sign In
Advertisement
in: Tier 5, Tier High 5-A, Characters,
and 41 more

Yvraine, known as the Emissary of Ynnead, the Daughter of Shades, the Opener of the Seventh Way, the Herald of the Whispering God, amongst numerous other titles and epithets, is the High-Priestess of Ynnead, the leader of the Ynnari, and the mortal vessel for the God of the Dead's power and will. Since her ascension, Yvraine has become an inspirational figure, a promise of hope for the dying Eldar race, a promise of Rebirth to the ancient days of glory, and the final destruction of She Who Thirsts. But she has also become symbol of destruction, seen by many as a deluded fanatic who is leading all Eldar into their doom, her name inspiring both dread and revulsion. Neither side is truly correct, not completely wrong, and whether Yvraine will succeed or not in her ambitions of saving her people remains to be seen.

Originally, Yvraine was an Eldar of Craftworld Biel-Tan. Under the glowing domes and elegant spires of the world-ship she was raised, nurtured, and taught the ways of the Asuryani. At first she walked the Path of the Performer, thrilling the high society with intricate acrobatics and dances. As she aged, she became headstrong, and her art grew increasingly violent. When the Avatar of Khaine was roused within the craftworld’s heart during the invasion of Gnosis Prime, she took the Path of the Warrior, becoming a Dire Avenger under the tutelage of the famously deadly Laarian Starspeaker, Exarch of the Silvered Blade shrine, but that did not prove enough to Yvraine. Seeking a deeper connection to the infinite, she took the Path of the Warlock, and later the Path of the Seer, and through them she gained the esoteric understanding she craved, honing her psychic skills whilst still fighting in Biel-Tan’s armies.

Eventually, the life on the Craftworld proved too restrictive to her ambitions and desires. Dissatisfied, Yvraine abandoned her Craftworld and became an Outcast, wandering through the Galaxy as a Corsair under the guise of Amharoc, until becoming a feared admiral, and for a time she was satisfied. However, her increasing hubris led to mutiny, and Yvraine was forced to flee into Commorragh. Within the Dark City, both as a Succubus gladiatrix of the Crucibael, and as a Courtesan for the deadly leaders of the Kabals, Yvraine came to know a perverse sense of peace. But she saw that the Dark Eldar of Commorragh were no less trapped and restricted than their Craftworld counterpart. Be it through maddening hedonism or cold discipline, both lived solely to survive a step away from the grasp of Slaanesh. She desired change, a way to combat She Who Thirsts rather than merely hide from her gaze, and unbeknownst to her Yvraine would gain what she sought.

As the High Farseer Eldrad Ulthran performed a ritual on the moon of Coheria that would awaken the Whispering God from his slumber, Yvraine battled for her life on the Grand Arena of Commorragh, facing against Lelith Hesperax herself. Though she had great skill, she could not hope to defeat the Queen of Knives, and was mortally wounded. Meanwhile, Eldrad's ambitions were halted, and rather than awakening completely, the Whispering God merely stirred, rising to a premature, half-born state. However, this wasn't a complete failure, and as Yvraine laid dying, her spirit came into contact with the Whispering God, who chose her as his Herald. Thus, Yvraine was Reborn with newfound power and purpose, becoming determined to rise Ynnead to full apotheosis.

Yvraine would then go to become the High-Priestess of Ynnead, and by spreading the word of the God of Dead, Eldar of all backgrounds and societies would rally behind her cause, being Reborn as one of the Ynnari. On her home of Biel-Tan, Yvraine's quest took a significant step forward: As the Craftworld was assailed by armies of Khornate and Slaaneshi daemons, the Infinity Circuit on its heart fractured, and millions upon millions of Eldar souls were released unto the void. Though, rather than consumed by She Who Thirsts, these spirits were all gathered into the unconsciousness of the Whispering God, and through the death of a Craftworld was the Yncarne, Avatar of the God of the Dead, born.

Since that day Yvraine and her Ynnari have become increasingly numerous and influential on the Galaxy, both as Heralds of Salvation, and Harbingers of Doom. Undoubtedly, their greatest act so far has been the resurrection of the Primarch Roboute Guilliman, who now leads the Imperium of Man as its Lord Commander. This has solidified an effective, albeit unstable alliance between humanity and the Ynnari, who have put their differences aside - either willingly or through necessity - to combat the ever-growing forces of Chaos.

Classification: Eldar, Leader of the Ynnari, High-Priestess of Ynnead and Mortal Vessel for the Whispering God's deathly energies; Formerly Asuryani of Craftworld Biel-Tan, then Corsair Outcast, then Drukhari of Commorragh

Attack Potency: At least Dwarf Star level (Comparable to the Visarch, who slew a Daemon Prince of Nurgle within the Eye of Terror, and later a Great Unclean One of Nurgle. Participated in a battle against an Avatar of Khaine corrupted by a Genestealer Patriarch. Wields the Cronesword Kha-vir, which should be comparable if not superior to Prince Yriel's Spear of Twilight), likely higher (Her ascension into becoming the Emissary of Ynnead provoked a hyperspatial quake which shook the very fabric of the Dark City of Commorragh, a realm composed to multiple pocket dimensions containing a number of stolen dying stars within it).

Speed: At least Hypersonic+ Movement Speed, with At least FTL Combat / Reaction Speed (Even before her rebirth as the Herald of Ynnead, Yvraine was capable of contending with Lelith Hesperax in combat, and was one of the only two warriors to provide the Queen of Knives with some semblance of challenge. Since her ascension, Yvraine's speed has likely increased dramatically)

Intelligence: Superhuman. Eldar in general process information much faster than ordinary humans, and consider human thinking to be primitive, or akin to a child's. On top of that, Yvraine has centuries of experience on various Eldar Paths, such as the Path of the Performer, the Warrior (As a Dire Avenger), the Warlock, the Seer, and more. And when she could not find herself in any of them, Yvraine left her Craftworld and became an Outcast, eventually rising into the captain of a Corsair fleet. After a mutiny, she was forced to retreat into Commorragh, where she once again made a name for herself by becoming a Succubus of the Wych Cults, and being one of the two only beings who gave Lelith Hesperax a challenge in gladiatorial combat. As a result, Yvraine possesses expertise on numerous areas, being an incredibly talented warrior and psyker on multiple disciplines, a skilled leader and strategist, as well as a charismatic speaker. Since her ascension as the Herald of Ynnead, Yvraine has become an inspirational figure, rallying Eldar of all backgrounds together and forming the Ynnari, leading her race with promises of hope and rebirth. Finally, Yvraine is far more pragmatic and less arrogant than most Eldar, thinking on long-term gains, and even being willing to ally herself with humans if it means combating Chaos. Such thinking is what led to the resurrection of Roboute Guilliman.

The Yncarne, Avatar of Ynnead, is born from the dead souls of the fractured Craftworld of Biel-Tan 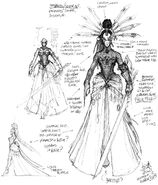