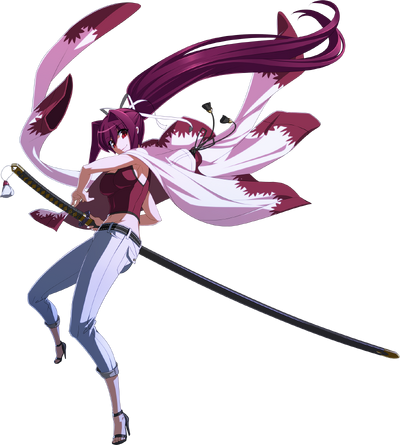 Yuzuriha (full name: Yuzuriha Sougetsu) is a playable character in Under Night In-Birth. She was born into the Sougetsu family, who defected from the Night Blade long ago, taking their Iris Sword with them. Yuzuriha is the most recent inheritor of the sword and her family's fighting style after her older sister, Hiroha, lost her powers. She met Hyde when he was still in elementary school, and although the two were close, their relationship has gotten awkward after a "certain incident", which has left Hyde guilt-ridden ever since.

Despite that, Yuzuriha tends to be very cheerful and carefree, not holding any serious grudges. However, she holds a more serious and realistic side to her personality. Having taken the responsibility of being the city's guardian, she kills every Void she encounters.

Name: Yuzuriha, Blade of The Godspeed

Attack Potency: At least Town level (Fought Waldstein and defeated Hilda, who was amazed at her power)

Intelligence: The current practitioner of the Dual Moon's One Blade Drawing Style, which she admits that she hasn't mastered yet.