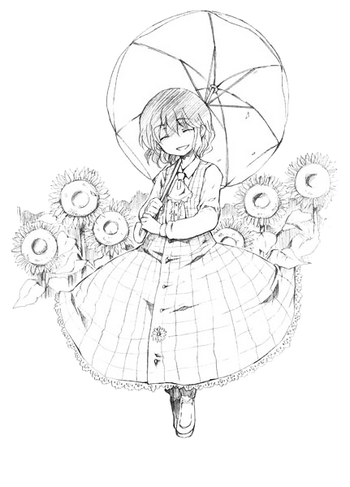 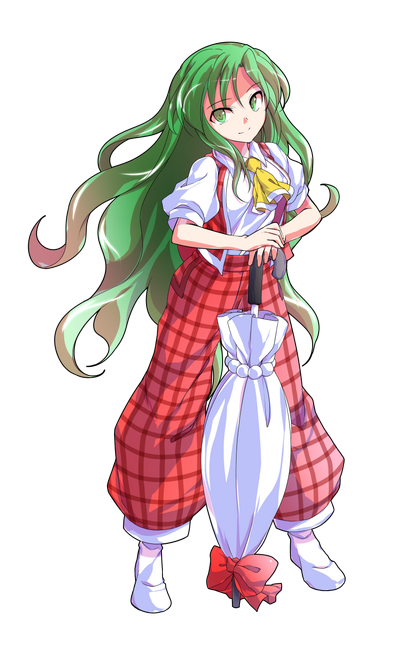 Yuuka Kazami (風見 幽香, Kazami Yuuka) is a mysterious, long-lived youkai most often found in the Garden of the Sun. With a threat level described as "very high" and a human friendship level described as "worst", she is a fearsome and immensely strong youkai despite her polite mannerisms.

Powers and Abilities: Superhuman Physical Characteristics, Flight, Magic, Danmaku, Plant Manipulation, Invisibility, Duplication, Transformation (Can transform into a ball of light in PC-98), Non-Physical Interaction (Can harm Phantoms and Evil Spirits with her regular attacks), Resistance to Mind Manipulation (Youkai can resist the effects of the true Moon, which can drive humans insane and kill them if they look at it), Longevity, Regeneration (Low-Godly; can regenerate from her incorporeal "mind")

Attack Potency: High Universe level, possibly Universe level+ (Seen as one of the most powerful beings in Gensokyo, and thus should be at least comparable to other high tiers) | Multi-Solar System level, likely Galaxy level (Was described as having the strongest power in PC-98 and fought on par with Reimu. Considered Shinki to be inferior to her)

Lifting Strength: At least Class 25 (Her physical strength is said to be tremendous. Superior to Tenshi)

Range: Extended melee range, at least tens of meters with Danmaku (Her firing range should be comparable to Sakuya's, who can throw knives at least 36 meters)

Standard Equipment: Her parasol, which is apparently the only flower in Gensokyo that never withers. It is a special parasol that drastically cuts off UV rays and can be used to block danmaku.

Intelligence: Presumably quite high. Yuuka is quite quick-witted, and she was able to instantly figure out the incident in Phantasmagoria of Flower View and what was happening.

- Manipulation of Flowers: Yuuka has the power to control flower and plant-life. She uses many flowers and flower-shaped bullets in her danmaku, and with this power, she can make flowers bloom, shift the face of sunflowers towards the sun, or make withered flowers bloom again.

- Master Spark: In Lotus Land Story, Yuuka is the first character to utilize the Master Spark, a massive, high-power laser. She also showcases a variant, "Twin Spark", in which she splits into two duplicates, each of which fires their own Master Spark. 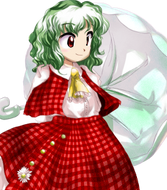 Yuuka in Phantasmagoria of Flower View

Yuuka in Kioh Gyoku
Add a photo to this gallery