Yuno「ユノ Yuno」 is an orphan who was left under the care of a church in the village of Hage. He is the wielder of the four-leaf clover Grimoire and a member of the Golden Dawn squad. He was carried to the Clover Kingdom by one of the last loyal mages to the Spade Kingdom's royal family after the Dark Triad had taken over. He ended up in the Forsaken Realm in Hage Village and grew up at the church alongside Asta.

Powers and Abilities: All previous abilities

With Spirit Dive he gains the following: Analytical Prediction via Spirit's Hushed Dance (Yuno takes control of the surrounding mana, enabling him to predict and evade attack), Weapon Creation via Spirit of Zephyr (After absorbing an elemental spirit, Yuno condenses external mana into a large, two-handed sword), Passive Deconstruction (His magic emanating from his body causes his surrounding's to disintegrate), Corrosion Inducement (Broke down Gaderois' rock armor, which was explicitly stated to be harder than iron, at a preposterous rate) and Possible Resistance to Possession (After being possessed by an elf and hearing Asta's determination to become Magic Emperor, Yuno's strong will allows him to keep his soul intact)

Stamina: High, Yuno is known to have vast mana reserves despite being a mere commoner, impressing the Magic Knight Captains in his first trail and managed to hold out against Mars for an extended period of time despite the fact that his attacks had no effect on his larger constructs.

Range: Up to several hundred meters with magic

Intelligence: Yuno was recognized as a genius from an early age, quickly mastering basic magic spells and receiving the Four-Leaf Clover Grimoire, which is given only to great heroes, decimating most normal foes in combat. As a result, he has a certain air of arrogance about him and is reluctant to accept help, but this belies the fact that he is actually very hard-working and that his "genius" status is partially because of his willingness to practice his magic constantly when compared to the far more complacent nobility.

Wind Magic: An elemental magic that allows Yuno to manipulate wind. Yuno has been seen to be proficient with this magic even before he received his grimoire. He usually uses this magic in the form of whirlwinds that could knock out his opponents in a single hit. He can also surround himself in wind to increase his movement speed as well as allow him to fly.

Creation Magic: A magic that allows Yuno to manifest any entities that he desires. Yuno uses this magic with his wind magic to create a wind-based entity. 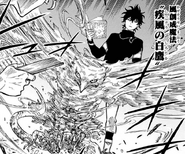 Spirit Magic: A magic that allows Yuno to summon a spirit that could assist him in battle. Yuno uses this magic to summon Sylph, one of the four Major Elementals, representing Wind. 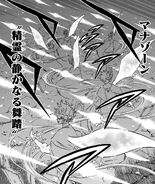