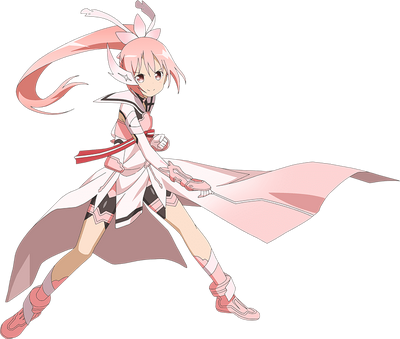 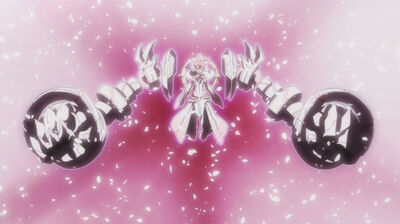 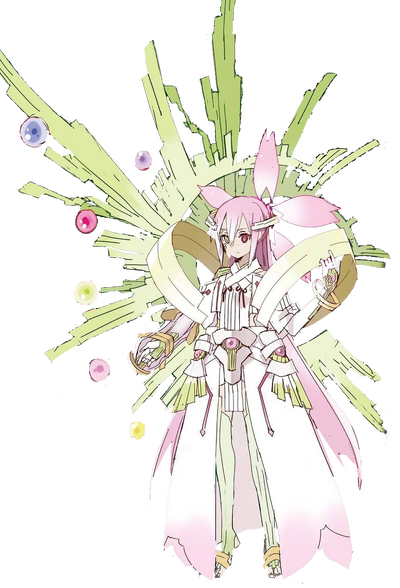 Yuna Yuki (結城 友奈 Yūki Yūna) is the protagonist and titular character of the Yuki Yuna is a Hero anime series. She is a second-year middle school student and a member of the school's Hero Club. She prides herself in being a hero, helping out others in need and always remaining optimistic.

Origin: Yuki Yuna is a Hero

Superhuman Physical Characteristics, Gauntlet and Greave proficiency, Energy Manipulation through her fairy Gyuki, Fire Manipulation through her fairy Kasha, Forcefield Creation, Damage Boost against divine beings, Invulnerability to damage and Immortality (Type 8) through her fairies (As the Fairies are parts of Shinju, who is a Universe Tier God, and they share its characteristics, they prevent Heroes from getting hurt or killed by anything below Universe level, Reliant on Shinju), Martial Arts, Resistance to cold and ice, Resistance to Black Holes and Gravity

All previous abilities but amplified, as well as wielding giant robotic arms rather than gauntlets and greaves, Flight

Previous abilities but amplified, as well as wielding giant robotic arms rather than gauntlets and greaves, Flight

Previous abilities of her Mankai form, but highly boosted by the influence of Shinju

Attack Potency: At least Mountain level (Is shown to be stronger than Fu and Karin, who can casually destroy the lower-ranked Perfect Vertexes, which are shown to be able to shrug off the strongest nukes) | Moon level (Was able to destroy Leo Vertex's soul, which is comparable to the size of Earth's moon) | At least Mountain level | Moon level | Universe level (Using the entire remaining lifeforce of Shinju, she killed the Heavenly Gods, who controlled the universe barring the small land Shinju was protecting, with a single punch.)

Stamina: Very High (Easily tanked being slapped around by the Scorpio Vertex) | Near-limitless in Great Mankai (from being fed all of Shinju's energy)

Intelligence: Average for a 2nd-year in middle school, but very adaptable in fights. In the matter of a single fight, she mastered everything she needed in order to fight the Vertexes from the techniques she acquired through the Hero System. She has impressive willpower, always standing up to fight against adversity and never giving up, despite having the odds against her; she even went as far as to directly confront her best friend Mimori Togo when she tried to destroy the world out of desperation. She's also a competent and charismatic leader, and is very proactive.

Weaknesses: If she loses the will to go on, Yuna cannot become a Hero. In YuYuShou, her immortality has limits.

Note: Over the course of the series, the Heroes have battled Vertexes of varying levels, ranging from Large Mountain to Moon level. When focusing on defense, it has been shown that Heroes can tank anything up to Large Country level (Scorpio Vertex) in Hero mode, and up to Moon level (Leo Vertex) in Mankai mode. However, on several occasions, whether in Hero or Mankai mode, Heroes have been knocked out by surprise attacks against which they didn't react in time. The Heroes are however unkillable by anything below Universe level, due to the divine protection they receive from Shinju, their God, via the Fairies.