VS Battles Wiki
Register
Don't have an account?
Sign In
Advertisement
in: Tier 7, Tier 7-C, Characters,
and 49 more 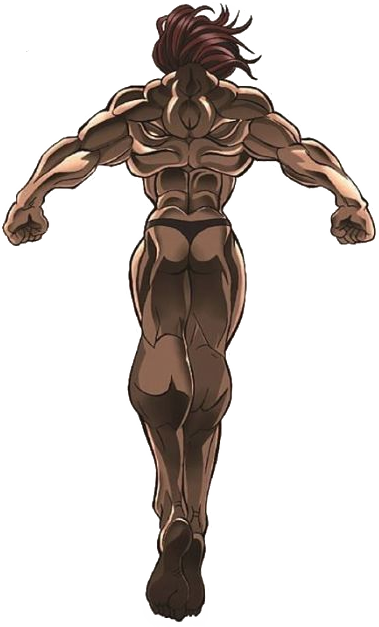 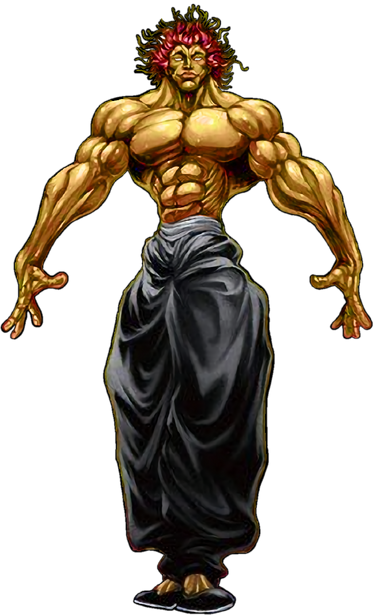 Yujiro Hanma (範馬 勇次郎, Hanma Yujirō) is the primary antagonist of Grappler Baki, the son of Yuichiro Hanma and father of the franchise's titular protagonist, Baki.

He's known as the strongest creature on Earth who no one, not even the United States Military, can defeat. After murdering Baki's mother in front of him, Baki spends most of the series trying to get revenge on Yujiro by beating him. Although Baki doesn't defeat Yujiro, he does eventually manage to give him a good fight and impress him, which prompts Yujiro to honor Baki with the title of strongest on Earth. Baki, however, didn't consider this to be a true victory.

Tier: At least 7-C, higher with Demon Back

Name: Yujiro Hanma, The World's Strongest Creature, The Ogre, Mighty One (By Musashi)

Powers and Abilities: Superhuman Physical Characteristics, Martial Arts Mastery, Genius Intelligence, Aura (Physical force and intimidation), Fear Manipulation (Yujiro's aura incites fear at the cellular level, a fear that is shown to affect comparable fighters to the point that some can't even touch him because they subconsciously avoid him, can passively incite fear in even a hardened veteran soldier, can make fighters feel as though they're being stabbed), Limited Durability Negation (Via Whip Strike, Cord Cut, pressure points and likely more), Limited Pain Manipulation (Via Whip Strike), Enhanced Pain Tolerance (due to his immense body control, he can completely negate the extreme pain of Baki's Benda), Power Mimicry (Can mimic any martial arts technique after seeing it once), Information Analysis (Can detect the physical conditions and weaknesses of a person with 100% accuracy by glancing at them), Chi Manipulation and Attack Reflection (Via Aiki), Damage Reduction, Body Control (Can make his body completely limp and flow like a blade of grass in a storm to reduce damage with Xiao Lee), Energy Manipulation and Attack Reflection via Offensive Shaori/Xiao-Lee (Absorbs the energy from his opponent's attack, adding it to his own to create the “ultimate strike”), Pressure Points (Could make Baki faint with a very slight touch), Paralysis Inducement, Extrasensory Perception (can sense someone's Seikuuken, can sense Baki's fighting spirit from ~8,000 miles away, and can sense/feel fighting spirits, Yujiro can sense a strong opponent while asleep), Enhanced Senses (Yujiro can smell strong men), Analytical Prediction (Can predict the entire outcome of a fight just by looking at a fighting stance, blocked an attack he specificaly says he couldn't see, predicts Baki's win over Li Kaioh despite Baki's poisoned state, should have Analytical Prediction superior to the likes of his son that can easily see through the moves of masters of many martial arts), Accelerated Development (Stated to constantly be improving at an alarming rate, also stated specifically to always be improving in terms of martial arts), Statistics Amplification (Via Demon Back, Cockroach Tackle, Death Concentration, Sangan, Stomp, and many other moves), Limited Illusion Creation (Saw Baki's triceratops and created his own beast, one he believed to be even stronger, the fighting spirit of Yujiro Hanma), Sense Manipulation (Could make people perceive sounds, smells, lights, and even impacts with his illusions), minor Madness Manipulation (Caused three soldiers to indulge in madness with his aura; the human body instinctively detects Yujiro as a threat), Stealth Mastery (Invaded many places monitored by US soldiers without being noticed, sometimes even going as far as perfectly walking in their shadows and avoiding their field of view, sneaked up on highly trained, elite soldier Captain Strydum despite Strydum waiting for his arrival), minor Longevity (Kaku believes that Yujiro will be alive in 100 years, is stated as being "stronger than time"), Instinctive Reaction (Instinctively sensed the danger of Kaku's punch and dodged, should be able to replicate the instinctive feats of his son), Status Effect Inducement (Yujiro uses a Yiquan/Taiki-Ken conceptual technique that leaves someone unable to breathe properly and causes tears and blood to obscure someone's vision), Likely Air Manipulation via Vacuum Palm (Should be able to replicate Yanagi’s moves), Self-Sustenance (Should have vastly more control over his lungs than Spec), Surface Scaling (Should be able to replicate Sikorsky climbing feat) and Earth Manipulation (Should be able to replicate Nomi no Sukune II stomping feat), Limited Invisibility (Should be able to replicate Baki's feat), Afterimage Creation (Should be able to replicate Baki's feats regarding this ability), Resistance to Electricity, Poison (Due to his physiology and skeleton structure he's resistant to both), Disease (Baki believes him to be immune to cancer and AIDs, stated as being stronger than viruses and bacteria), and Information Analysis (Similarly to Pickle, when Baki attempted to shadowbox against an imaginary Yujiro based on his analysis of him that was stronger than the original, Baki could not even imagine a version of Yujiro as strong as the real one)

Attack Potency: At least Town level (Casually stopped an earthquake with a punch), higher with Demon Back (Able to easily defeat enemies he was even with. Is far superior to Baki Hanma's incomplete Demon Back, which more than doubled Baki's power)

Speed: At least High Hypersonic+ (Should be superior to Hitless Blow which is confirmed speed of Mach 78), higher with techniques, higher with Demon Back

Lifting Strength: At least Class M (Stronger than Nomi no Sukune), higher with Demon Back

Striking Strength: At least Town Class, higher with Demon Back

Durability: At least Town level, higher with Demon Back (Withstood many attacks from Demon Back Baki and Full Power Musashi). Defensive Xiao Lee makes him hard to kill.

Intelligence: Extraordinary Genius (Yujiro is known as the single most dangerous being on the planet, mastering virtually every martial art known to man including ones only passed down through noble blood and single-handedly defeating the entire U.S. Army during the Vietnam War with nothing but his bare fists. He is extremely analytical, being able to decipher and fully utilize virtually any technique after seeing it once and knows over twenty languages. Yujiro also has an extremely in-depth knowledge of human anatomy, even more than skilled surgeons, high tech x-ray machines or talented medicine men. He's able to use this knowledge to exploit his foes' weaknesses and make fights last longer. He has extensive knowledge in many fields, such as cooking, biomechanics, biology, chemistry, arithmetic, zoology, and more

Weaknesses: Yujiro is very arrogant and is thrilled by the thought of a good fight, but this doesn't make him foolhardy. He tends to not counter with the opponent's mastered arts because he considers it to be rude