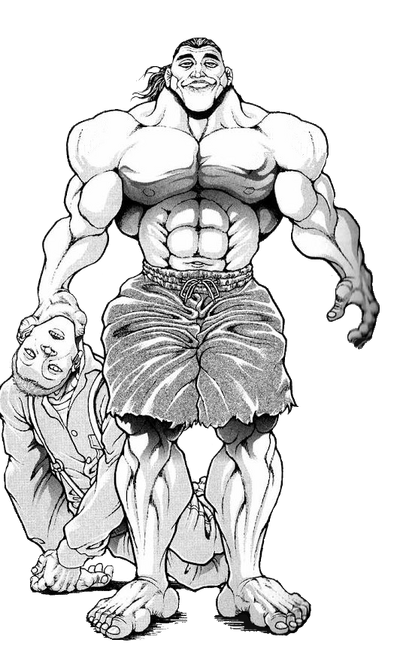 Yuichiro Hanma (範馬 勇一郎, Hanma Yūichirō) is the father of Yujiro Hanma and grandfather of Jack Hanma and Baki Hanma. He is the only person aside from Yujiro to defeat the USA, he did it on a small island in the Okinawa territory during World War 2. He is also known for defeating 2,000 U.S. soldiers using one technique. Not much is known about him, but he is said to be the opposite of Yujiro, showing that he is kind. This is also shown when he shows up in a spirit form to support Baki in his fight against his father. Said to be the only man Yujiro cannot defeat.

Tier: 7-C, higher with Demon Back

Powers and Abilities: Superhuman Physical Characteristics, Ogre Physiology, Enhanced Sixth, Martial Artist, Aura Intimidation, Astral Projection (Manifested his spirit to speak to Yujiro and Baki during their fight), Statistics Amplification (Via Demon Back), Body Control, Analytical Prediction and Information Analysis (Can tell how powerful someone is and what fighting style they use by observing their outward/physical appearance)

Attack Potency: Town level, up to Town level+ with Demon Back (Comparable if not superior to Yujiro Hanma, single-handedly defeated the US Military during WW2; every one after seeing his spirit alone remembered his violent energy as well as scaring and surprising Yujiro, called the strongest even in the presence of Yujiro)

Striking Strength: Town Class, up to Town Class+ with Demon Back

Durability: Town level (Tanked over 1000 tons of munitions from the US Military for days on a small island), Town Level+ with Demon Back

Intelligence: Is an extremely talented martial artist that knows he is powerful but isn't arrogant like his son, outsmarted and overpowered the entire U.S. Military during WW2.

Yuichiro vs the U.S. Navy