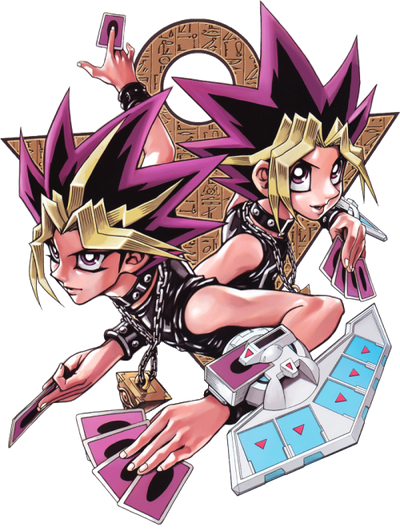 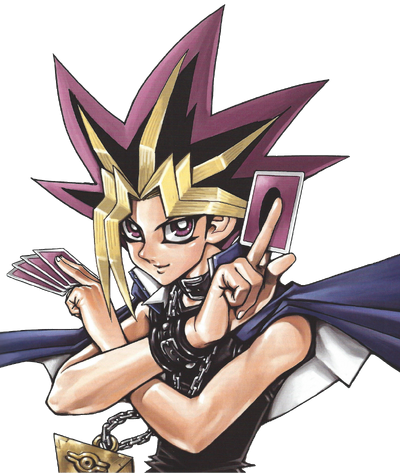 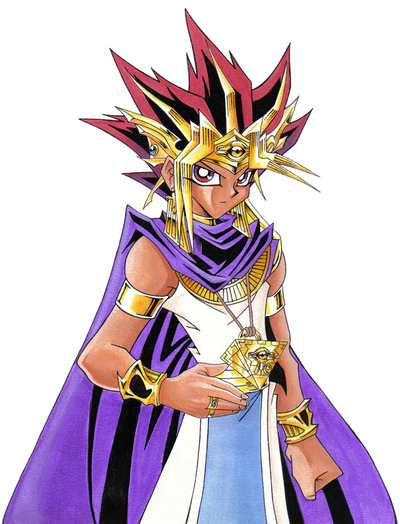 Yugi Muto is the main protagonist of the original Yu-Gi-Oh! series. The modern reincarnation of the ancient Pharaoh Atem, he completes the Millennium Puzzle and gains a second personality, Dark Yugi, that takes the place of Atem's sealed spirit. The two personalities must now work together to find the mystery of the other Millennium Items and the lost memories of Atem's past.

Powers and Abilities: Genius Intelligence (It is claimed that completing the Millennium Puzzle alone requires high intelligence.), Multiple Personalities (Dark Yugi is considered a separate conscious in his mind). Sealing (Atem's and some of Zorc's soul was sealed inside the puzzle), Clairvoyance (Can show the wielder something they wish to find), Pocket Reality Manipulation (There exists a world of Atem's memories within the puzzle itself), and Illusion Creation (Anyone attempting to piece together the puzzle may be shown a horrifying illusion) with the Millennium Puzzle. Illusion Creation, Mind Manipulation (Dark Yugi possesses these powers to play Shadow Games and cast Penalty Games to the loser, which can have an extremity of death by shock or a complete shutdown of the mind.), and Empathic Manipulation (Shadow Games reveal a person's true nature) with Shadow Games. | Sealing and Clairvoyance with the Millennium Pendant. Summoning of ka and the Egyptian Gods.

Durability: Athlete level (Has taken beatings from those physically stronger than him several times) | Athlete level

Stamina: Varies (Yugi's Stamina is Average, but Dark Yugi's stamina is Superhuman. This is due to the experience Dark Yugi has in Shadow Games compared to his other self). | Superhuman (No matter the damage to his ba, he will keep fighting until his ba is depleted.)

Weaknesses: Dark Yugi cannot come out if Yugi is not wearing or does not have physical contact with the Millennium Puzzle (but can take it off once he has taken over). If Yugi's soul is erased or dies, Dark Yugi will no longer exist. | Atem cannot summon the Egyptian Gods or ka without the Millennium Pendant. If Atem runs out of ba, he will die.

Note: Ba represents one's life force or life energy, while a ka represents one's spirit of a monster being controlled by another via their ba. Damage to a ka will also damage their ba, and if all of their ba (or life energy) is depleted, then they will die. If a ka is summoned through other means, it will not cause the summoner's death if it is killed.

John Kramer (Saw) John Kramer's Profile (John was in his prime. The shadow game was Jenga)