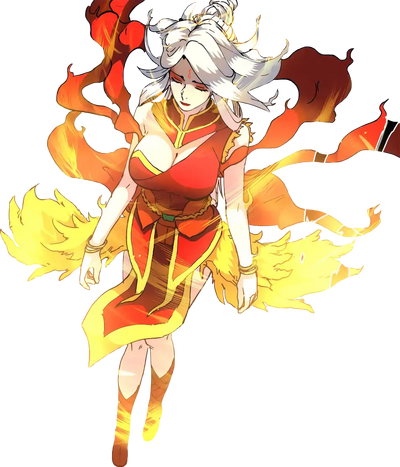 Yu Yan is the spiritual god of fire and a member of the human tribe. Her past is mysterious as she was not born in the Tiny World, but rather landed on it from a meteor. During the battle with the demon beast tribe's spiritual gods, her physical body was destroyed and her Divine Spark was scattered. Because her very essence is merged with the law of fire, she did not die and has spent tens of thousands of years reforming her divine spark in the Black Spring

Age: Over a hundred of thousand years

Intelligence: Very High, she has over hundred of thousand years of fighting experience and has shown to have vast knowledge, especially when it concerns artifacts, power of law and history.

Weaknesses: She will need ten thousands of years to resurrect herself and will lose her immortality and her control over the law of fire if someone comprehends and control it better than her.

Retrieved from "https://vsbattles.fandom.com/wiki/Yu_Yan?oldid=5594449"
Community content is available under CC-BY-SA unless otherwise noted.