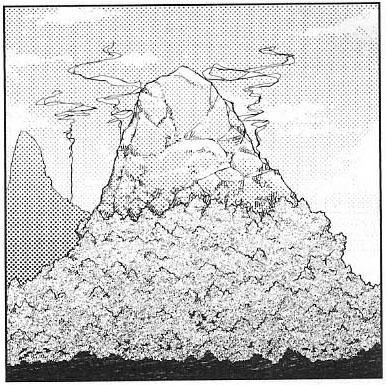 The Youkai Mountain is an important landmark in Gensokyo and home to several youkai, as per its name. The mountain covers several smaller locations such as the Giant Toad's Pond, the Moriya Shrine, the Genbu Ravine and the Untrodden Valley.

Despite the Tengu having the largest dominion over the mountain, notably by establishing their dwelling place inside it, it is also home to the Kappa near the base and the Moriya Shrine near the top. This profile covers the uneasy alliance between these three forces, with the Tengu as the most important part.

Classification: Alliance between the Tengu, the Moriya Shrine, and the Kappas

Age: Over a decade in its current form (The Moriya Shrine settled there in 2007), the Tengu were there for vastly more than 1000 years (A singular tengu, Aya Shameimaru, is 1000 years old on her own. The tengu existed within the mountain since way before the Oni went into hiding in Hell)

Territory: The Youkai Mountain. The Moriya Shrine has some limited control over part of the Underground

Technology/Abilities: They possess printing technology on par with humans and photography technology just behind it. Kappa possess thousands of different water-proof gadget, often weaponizing water in the process

Industrial Capacity: Capable of producing enough copies of two different newspapers daily for each inhabitant of Gensokyo for free, despite aiming for profit. A single Kappa is capable of keeping herself armed with several missiles and bomb daily. Their production rate should be comparable, if not superior to the Outside World's.

Military Prowess: Unknown. However, each Kappa possess their own weaponry, which includes small personal war machines and a variety of explosives

Weaknesses: The three groups are sometimes are odd with each other, especially the Moriya Shrine.

Retrieved from "https://vsbattles.fandom.com/wiki/Youkai_Mountain?oldid=5189885"
Community content is available under CC-BY-SA unless otherwise noted.