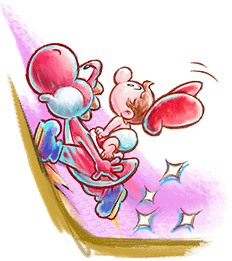 Yoshi (Japanese: ヨッシー, Yosshī, sometimes specified as Green Yoshi) is one of the heroes of the Mario series, an ally of Mario and Luigi, and the protagonist of his own series. He is a member of the Yoshi species and has aided his brethren in saving their homeland on multiple occasions. In his youth, Yoshi managed to rescue and protect Baby Mario and Baby Luigi from the wrath of Kamek and the Koopa Troop. According to Super Mario RPG: Legend of the Seven Stars, Yoshi is one of the few members of his species who can speak the language of the other characters, though it seems that this is not his first language, since, as in other games, his statements are translated through parentheses. In the Mario series, he is a major character and often acts as a steed for Mario and other protagonists, while in most of the Mario sports and party games, he is a playable character.

Superhuman Physical Characteristics, Underwater Breathing (Type 2), Self-Sustenance (Type 1), Fourth Wall Awareness, Vehicular Mastery, Acrobatics, Enhanced jumping capabilities, Extendable tongue, Can eat almost anything, Can create eggs and use them as projectiles, Pinpoint accuracy, Regeneration (Mid, survived being crushed flat), Can use power-ups to enhance his stats, Egg Transformation and Egg Forcefields, Gravity Manipulation, Telekinesis, Homing Attack, Attack Reflection, Transmutation (His stomach turns enemies into eggs, he can spit bubbles that turn enemies into bubbles with items in them, and he can spit juices that turn enemies into platforms), Can emanate light and has control over rainbows, Time Manipulation, Energy Manipulation, Energy Projection, Afterimage Creation, Super Dragon Transformation, Fire Manipulation, Earth Manipulation, Metal Manipulation, Ice Manipulation, Water Manipulation, Size Manipulation, Flight, Shapeshifting and Power Mimicry (With Mario, Luigi, and Wario caps), Intangibility, Invulnerability with star, mega mushroom and heart fruit, Teleportation (When sent down a pit, turns himself into an egg and warps back to a respawn point), Can eat ghosts, Surface Scaling, Resistance to Extreme Cold, Cosmic Radiations, Transmutation (Will turn back into his normal form after a set period of time against his will), Gravity Manipulation (Has adjusted his gravity to walk normally on hundreds of different sized planets and has been near black holes), and Black Holes, etc.

Attack Potency: Multi-Solar System level (Defeated Raphael Raven, turning him into a constellation afterward. Confronted Kamek, who empowered Raphael Raven, and adult Bowser several times and defeated both of them at once at one point. Is capable of creating Power Stars, which can create pocket dimensions full of stars) | Varies from Multi-Solar System level to Galaxy level (Fought and defeated Bowser, who was also amped by Power Stars)

Lifting Strength: Pre-Stellar (Even when not amped, Yoshi can hold Power Stars)

Stamina: Very high (Can take countless hits and fight several amped bosses with no notable signs of exhaustion, sometimes while suffering the negative effects of Kamek's magic. Traveled through several lands with five other Yoshi's as a storybook character, and did so alone on another occasion). Infinite with a Heart Fruit.

Range: Standard melee range, hundreds of meters by throwing eggs (Can throw his eggs this far to precisely hit the giant Baby Bowser in the face)

Standard Equipment: His eggs, Caps that transforms him to other characters, a Dash Pepper that enhances his speed, a Blimp Fruit that makes him fly like a hot air balloon, the Bulb Berry that allows him to see anything in the darkness and materialize intangible objects, Morph Bubbles transforms him into vehicles and objects, Watermelons grants him elemental seeds to use as projectiles, Heart Fruit transforms Yoshi into Super Happy Yoshi which makes him faster, stronger, and invincible, Flutter Wing turns him into Winged Yoshi, Golden Flutter Wing grants him unlimited flight and invincibility, Yoshi Stars grant him super speed, invincibility, and flying blast attack, badges from Yoshi's Woolly World that grant abilities such as fire and lava immunity and unlimited fire and ice watermelon, etc. Red, Blue, and Yellow shells allow Yoshi to spit fire, fly, and create earthquakes respectively when they're in his mouth.

Intelligence: Surprisingly high (Skilled in shooting and sniping his eggs, capable of understanding both human and his species' speech, and is often the leader of the Yoshi clan. Has helped thwart Bowser's plans, even when the threat is universal, and occasionally does it without the help of Mario)

Weaknesses: He easily panics after being attacked with a rider. Some power ups are temporary. Some of his powers require things to be in his mouth.

Swallow: Yoshi catches enemies with his long adhesive tongue and swallows them to either turn them into an egg or devours them completely.

Egg Throw: Yoshi will pinpoint his target and throws either his signature Yoshi Eggs to attack enemies or Yarn Balls to restrict them. The eggs occasionally shown to have ricocheting, explosive, and homing capabilities.

Mega Eggdozer: Yoshi will throw a gigantic heavy egg across large distances. It has an even heavier variant called Metal Eggdozer. These eggs are powerful enough to hurt Bowser in his giant form.

Ground Pound: Yoshi slams his rear end on the ground with great force, which can cause many results such as creating shockwaves.

Rainbow Flutter: Yoshi will use his signature Flutter Jump technique and will either strikes the target or throw an object with rainbow-infused power, leaving a rainbow trail. The latter action will create two objects after the toss, with the second one serving as either a decoy or extra projectile.

Foot of Fury: Yoshi's Super Strike. After being surrounded by yellow and green sparks and rings, he then kicks the target with energy.

Bubble: Yoshi will incase himself in a bubble. Being within the protective bubble will make him impervious to hazards and the attack of his foes.

Magic Weapon: Yoshi forges a weapon of pure energy in shape of a hockey stick. It's only seen in Mario Sport Mix in a fight against the Behemoth.

Zone Speed: Yoshi slows down the flow of time using his energy.

Gravity Control: An ability Yoshi learns from the Spirit Who Loves Surprises. Yoshi can use his gravity powers to tilt the world into his own perspective, even upside-down, and manipulate objects and foes with gravitational force.

Badges: Yoshi can use a variety of badges that can grant him special abilities such as making his ground pound stronger, unlimited fire and ice watermelons, and immunity to fire and lava-based attacks and obstacles.

Keys: Base | When powered up by a Power Star