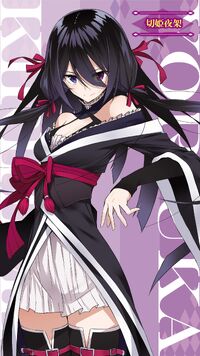 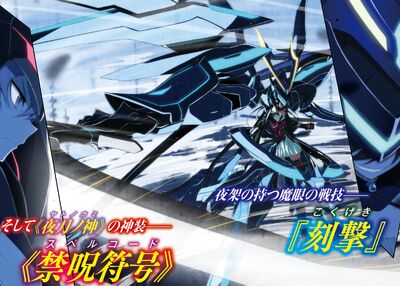 Yoruka Kirihime is one of the protagonists of Saijaku Muhai no Bahamut. She is known as the "Empire's Assassin Blade", due to being the strongest Drag-Knight of the Old Empire who served the imperial family, who became student at Royal Knight Academy.

Stamina: High. Yoruka has received a 10% Baptism, which can inflict agony beyond imagination, being described by people who survive them as having their blood boiling in addition to pain across their entire body, and stated by Singlen to tamper a lot the nerves in the whole body, and recover from it. Due to this, she has been shown to be able to use her Divine Drag-Ride for extended periods of time.

Intelligence: Yoruka is a Drag-Knight prodigy, being the only Drag-Knight of the Old Empire, aside from their creators Lux and Fugil Arcadia, to master the Hidden Techniques, and even being able to develop a new one not even Lux can perform or even understand

Weaknesses: Yoruka needs to touch her opponent for Spell Code to take effect. Using Recoil Burst requires a great deal of concentration, but Yoruka doesn't have problems using the technique even under high pressure due to her great skills. Over Limit lasts five minutes, and using it deals a heavy physical backslash to Yoruka, to the point it can put her on a state that forbade her from fighting during multiple days