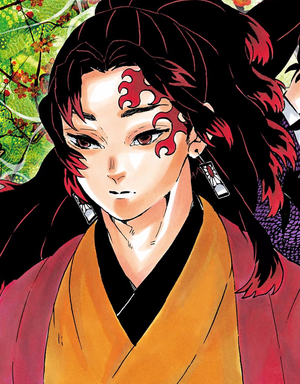 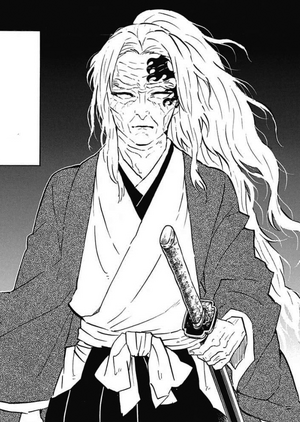 Yoriichi Tsugikuni (継つぎ国くに縁より壱いち Tsugikuni Yoriichi) was a member of the Demon Slayer Corps during the Sengoku Era. He was the younger twin brother of Michikatsu Tsugikuni, who later became Upper Moon One, Kokushibo.

Superhuman Physical Characteristics, Genius Intelligence, Acrobatics, Master Swordsman (Is the most powerful swordsman known so far in the series, far more skilled than the Pillars), Air Manipulation (via Breath of the Moon and Dust Devil Slice), Perception Manipulation (Breath users can create seemingly elemental effects. Yoriichi can make others see fire and feel the opponent like he's burning. Can possibly use the Breaths of Wind, Flames, Thunder, Stone, Water and Moon as Breath of the Sun was the basis for all of them and Yoriichi changed his style to suit the individuals he taught), Accelerated Development (Casually defeated a experienced swordsman after his first time holding a sword), Information Analysis, Enhanced Sight, and Analytical Prediction with See-Through World (See-Through-World makes user see directly opponent's muscles, blood flow and movements which allows them to predict their next moves), Statistics Amplification (Breaths increase user's speed and power to match Demons. Also has Demon Slayer Mark that drastically boosts his speed and power), Absorption (Nichirin Blades absorb sunlight), Regeneration Nullification (Up to High-Mid with Crimson Nichirin Blade. Nullified Muzan's nearly instant regeneration), Body Control, Regeneration (Low. With breathing, one can stop hemorrhages)

Attack Potency: Multi-City Block level (Is the greatest Demon Slayer known so far. Easily defeated Muzan and cut off his head, forcing him to escape. Nearly cut Kokushibo’s neck with a single attack while dying from old age)

Speed: At least Massively Hypersonic+, possibly higher (Far faster than Pillars and Zenitsu, who could do this. Blitzed Muzan and cut 1300 of 1800 flesh parts that remained of him after he exploded himself. Blitzed Kokushibo while dying of old age), higher with See-Through World

Lifting Strength: At least Class 50, likely Class 100 (Should be comparable to Gyomei Himejima as the strongest known Demon Slayer so far)

Durability: Possibly Multi-City Block level (Should be comparable to his AP and more durable than marked Pillars)

Stamina: Very high (Was never shown to be tired, even as a child after running entire day through mountains. His stamina should be comparable if not higher than Pillars' who can train through training that makes them cough blood and puts them on verge of death)

Intelligence: Genius (He is a battle prodigy and effortlessly defeated a trained swordsman after his first time picking up a sword)

Breath of the Sun (日ひの呼こ吸きゅう Hi no Kokyū): A Breath style used by Yoriichi.

Breaths possibly granted by Breath of the Sun:

See-Through World (透すき通とおる世せ界かい Sukitōru Sekai) - Yoriichi had the ability to see the "see through world", allowing him to see the muscles, blood flow, and joint movement of his opponents. He could accurately predict the techniques and attacks of his opponents with this ability.

Note: Yoriichi should have possibly all the abilities granted by those Breaths listed on respective user's profiles

Retrieved from "https://vsbattles.fandom.com/wiki/Yoriichi_Tsugikuni?oldid=6221721"
Community content is available under CC-BY-SA unless otherwise noted.