Yomika is the protagonist of Yume Graffiti. She lives in a lone cabin in the jungle, isolated from any civilization. As a result, she spends most of her time in her dreams.

Attack Potency: Human level | At least Wall level+, likely Small Building level (Completely destroyed part of a metal door with the Hair effect. Smashed a hole through a wall). Town level with Environmental Destruction (Can summon storms over large areas). Universe level+ via waking up (When she wakes up, the whole Dream World is completely erased until she comes back, as her dreams vanish when she is awake. She can trigger this manually, although it is also triggered automatically when she "dies". The Dream World was shown to be similar to the real world in size several times)

Speed: Normal Human | At least Superhuman (Can quickly fly over a distant city with the Tengu effect)

Standard Equipment: None | Her 20 effects

-Effects: Yomika can equip any of the following "Effect", changing her appearance and giving her new abilities based on the effect in question. She can only equip a single effect at a time. When she changes effect, any damage to Madotsuki will be reset. 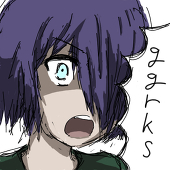 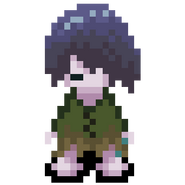 Yomika's sprite
Add a photo to this gallery