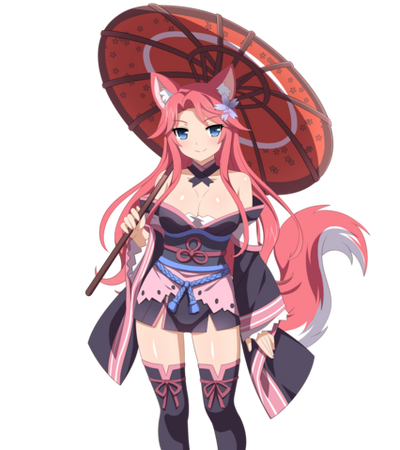 Yomi is a fox spirit and former dungeon master betrayed and sealed several centuries, if not millennia, before the game's beginning. She is unsealed and woken by the knight and adventurer Ceri, who attempts to slay her, but gets instead captured and enslaved by Yomi's magic. The two eventually come to an agreement, and decide to clear out her former dungeon to reclaim it for herself.

Superhuman Physical Characteristics, Non-Physical Interaction, Enhanced Senses (Of an actual fox), Stat Amping with Flow, Flight, Accelerated Development (Mental, all witches can learn at a heightened speed. Can tap into the void to increase her power), Illusion Creation (Mainly used to appear human), Enchanted Armor (All her clothes are as effective as full body armor), Summoning (Of her subordinates), Eternal Youth, Elemental Manipulation (Fire, Water, Ice, Electricity, Wind, Poison), Regeneration (Low-Mid), Power Bestowal, Extrasensory Perception (Can feel other's aura, and how powerful they are), Willpower Manipulation/BFR with Capture Magic, Void Manipulation (Unknown application, she has void magic that lets her make a hole in the universe to the void. Making a large one would apparently have dire consequences), Higher Dimensional Manipulation (Through communicating and delving into Eldritch magic, she could theoretically change reality on a fundamental level such as the likeliness of bad things happening all over the world, but she and most mages find it far too intimidating to even attempt), Weather Manipulation, Soul Manipulation (Can make souls be reborn as they are without meeting the god of death), Holy Manipulation, Power Absorption (Absorbed the Tiger's powers while capturing her. Reclaims all the power stolen from her by beating enemies), Spatial Manipulation (Can increase the amount of distance she travels with a single step through altering reality itself), Teleportation, Dimensional Travel, Resistance (To Elemental Manipulation, Mind Manipulation, Status Effects, Corruption and illusions)

All previous, Self-Resurrection (Once per battle), Resistance to Dimensional BFR and forced teleportation, Transformation into a demon

All previous, Reality Warping/Non-Physical Interaction (Can force the abyss, a chaotic realm with no width, length and depth and beyond the comprehension of three dimensional beings, to take an understandable and concise form), Power Nullification (Can nullify magic, as well as technology that uses ambient energy/mana to work), Resistance to Madness Manipulation (Type 3)

Attack Potency: At least Wall level (Can casually shatter armor) | At least Building level (Can summon lightning bolts to attack for a relatively weak attack), possibly City level (Can summon a "terrible storm" to attack enemies, though this should realistically be impossible since it's used in the limited area of the dungeon. Should be superior to monsters that use earthquakes as a method of attack) | At least Town level (Has obtained her full power back, which was distributed between enough monsters to fill an entire city, which should likely be in the thousands, each comparable or superior to her previous key. Ceri thinks she could easily destroy a city), likely Island level (Re-absorbed several hundreds of times the power her previous key had. Should be comparable to the mage that made their dream real, creating an alternate reality with an "endless" desert within it. Defeated Izanami, who would have "brought calamity to the world" the moment she broke her seal), Unknown through Eldritch Magic

Lifting Strength: Superhuman | At least Class 5 (Comparable to fighters that can lift giant weapons like a hammer with a hammerhead the size of a human) | At leas Class 5

Standard Equipment: Warp Gem (Allows her to teleport back to her hometown), enchanted rope (used for Kinbaku), Magic Scrolls (Instantly teaches the magical skill written in them), Health Potion, Reviving Balm (Revives and repairs the armor of a party member), Elixir (Revives, heals and puts everyone in the party to their top condition), Warding Stone (Reduces the enemy encounter rate), Seeds (Permanently increase a set stat), Luck Statue (Gives the blessing of the goddess Fortuna, the goddess of luck)

Intelligence: Genius, lived for several millennia and learned about civilizations, magic, the laws of reality, the larger universe and even about other realities and the afterlife. Could create an observatory capable of communicating with beings galaxies away, saw and learned about several kinds of fighters and can create forcefields and glyphs against teleportation, dimensional travel and even reality warping.

Weaknesses: Extremely weakened | Easily forgives others, and is extremely lax about enemies due to her long life. Especially sympathetic to cute girls, or those in love. | Same as before.

Flow: When reaching a certain level of concentration in battle, she enters the "Flow" status. All of her stamina is instantly restored, her regeneration becomes faster, and she receives a 25% dodge and hit rate increase.