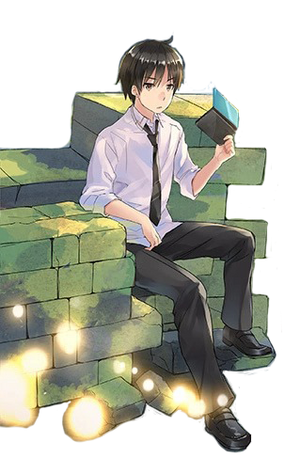 Yogiri Takatou is the main protagonist of the Instant Death series and a high school student who got transported to another world by a woman called Sion. After being abandoned by his classmates, Yogiri and his new friend Tomochika decide to explore the new world outside, hoping to find a new way back home.

Although his past is still mostly unknown, Yogiri has been shown to possess a special and powerful ability that can instantly kill anything he desires with a single thought.

Death Manipulation, Curse Manipulation, Power Nullification, Perception Manipulation, Immortality Negation (Types 1, 2, 3, 4, 5, 7, 8, and 9), Existence Erasure, Reality Warping, Non-Physical Interaction (Can kill ghosts, souls, concepts, and abstract beings), Soul Destruction (Killed the souls resigned within Chelsea's dolls; Killed Teresa and her soul), Fate Manipulation (His existence is protected by Fate; Aoi saw that every future and possibility leads to Yogiri's victory), Limited Madness Manipulation (Type 3. Those who try to see his fate/future, or predict his actions, turn completely insane), Deconstruction (Can kill poison gas on a chemical level), Extrasensory Perception (Can see the black lines of death), Precognition (Can predict any potential harm towards him or his allies), Enhanced Senses (Can sense killing intent and any potential harm towards him), Instant Translation (Everything he hears or speaks automatically gets translated by his equipment), Resistance Negation (Can pierce through 20 layers of resistance to death abilities, with each layer being superior than the other), Conceptual Destruction (Type 3. His ability can kill on a conceptual level; Killed the HRE and all the numerous (likely countless) heavenly records that were inside of it; Heavenly records are stated to be conceptual in nature).

Resistance to Information Analysis (Shown here; Also has a ring that disguise his status), Resistance to Fate Manipulation (His ability is stated to be beyond fate), Causality Manipulation (The HRE failed to overturn the decided event that is his death due to Yogiri's ability, even after making it so that event should have not happened) and Plot Manipulation with Instant Death (With the Meta Perspective, Aoi saw that she would lose to Yogiri through every possible future)

Speed: Peak Human, up to Immeasurable reactions and attack speed with Instant Death (Has reacted to characters who can move much faster than the eye can see. Killed a Demon Lord and his passive miasma which would have killed Yogiri. Killed the HRE's avatar who traveled through time to escape from Yogiri's power. Killed the Heavenly Record Eater's true form before it could kill him, who is a being beyond time and space)

Standard Equipment: A Japanese sword, his school uniform, his Ring