9S is one of the main protagonists of NieR: Automata. He is a male model of the Type S (Scanner) series of androids produced by YoRHa. This type of android is created for hacking and the collection of information.

Powers and Abilities: Superhuman Physical Characteristics, Flight (Via Flight Unit), Expert user of close range weapons and martial arts, Telekinesis (Uses it to move his weapons), Regeneration (At least Low, higher, possibly High-Low over time; via nanomachines), Immortality (Type 8; Cannot die as long as his memory data exists in the YoRHa Network), Resurrection (Should the active body be destroyed his memory data from the YoRHa Network will automatically be put into a replacement body), Barrier Creation (Shielded 2B and himself from Grun‘s electromagnetic waves), Scanning, Hacking (Can hack any machine, computer, etc. wirelessly over a distance of multiple meters), Can transfer his consciousness into any machine, computer or digital network, Self-Destruction, via Plug-in Chips: Heads-up display on the combat visor (With minimap, enemy location, data on enemies, various other information), Shockwave Creation, Statistics Amplification (Increase of attack power, defense and speed. Significant boost of attack power when health is in critical condition), Invulnerability (Gains invulnerability for 6 seconds after taking damage), Healing, Absorbing Damage, Potential Instant Resurrection (Each body has a 50% chance on reviving in top condition after being killed), Damage Reflection (Each damage taken has a 50% chance of being dealt back to the enemy with power doubled), Time Manipulation (Time gets slowed down for everyone except the user, activates when dodging an enemies attack or when an enemies long range attack is closing in), Improved Hacking (Stunning enemies, setting enemies on fire, remote controlling enemies makes them stronger), via Weapons: Statistics Amplification (Various weapons; Offensive, Defensive, Attack Speed), Afterimage Creation and Teleportation (With Engine Blade equipped; Has a range of up to 24 metres), Increased chance to stagger the opponent (Various Weapons), Healing (Various weapons), Explosion Manipulation (With a Type-3 Weapon equipped), Potential Mind Control (With Spear of the Usurper equipped; Every hit has a chance of subjugating the opponents mind), via Pod: Homing Attack (With Pod B and Pod C), Energy Projection (Can fire a continuous ray of energy and highly destructive lasers), Gravity Manipulation (Via A140 Gravity), Electricity Manipulation (Via A150 Volt), Barrier Creation, Information Analysis, Healing, Manifestation of Weapons and Chains, Holographic Image Creation (Via A100 Decoy), Time Manipulation (Via A110 Slow), Stealth Mastery (Can set up radio wave camouflage)

Attack Potency: Large Town level+ (Can do battle with Engels, which are this strong, and Eve, who can easily cause a cave collapse with a yell), Mountain level with Black Box detonation (should be comparable to this. Wiped out himself, 2B, and 4 Engels without a trace.) Hacking negates durability to an extent against machines and androids by causing them to explode from within.

Lifting Strength: Superhuman physically, likely Class K with telekinesis (Should be comparable to 2B, who can wield Engels arm as a weapon)

Durability: Large Town level+ (Survived riding a nuclear missile into Grun's mouth. Can take hits from Engels and Eve), higher with shields (can no-sell attacks from adversaries of comparable strength to himself)

Stamina: Virtually inexhaustible (Is an android. YoRHa type androids do not need any fuel to function)

Intelligence: At least Gifted. Is a skilled hacker, saved 2B and himself from getting caught up in YoRHa's network corruption and resulting destruction. Temporarily neutralized a Logic Virus infection within himself, which is extremely difficult and at times impossible for other androids to do without the use of a vaccine program. Backed up his data and consciousness into the network of surrounding defunct machines to save himself after contracting a Logic Virus infection he was unable to combat.

Weaknesses: Scanner Models are not optimized for battle, although this hasn't really affected him. As an android he is vulnerable to electromagnetic waves and viruses, and hacking, although his barriers give him heightened protection from electromagnetic waves and his skill at hacking gives him a leg up in defending himself from viruses and hacking. The body he is currently in dies if the OS chip is removed. He will lose his Type 8 immortality if the YoRHa network is destroyed. His mental stability was impacted severely by the death of 2B, and caused him to become deranged, violent, and lack a sense of self-preservation.

Note: A2 surviving the destruction of Mt. Ka'ala and having it scale to the rest of the cast was discussed and rejected as an outlier here.

Pods are small robots that follow and support the main Characters of NieR:Automata. The number of pods accompanying an android is three (Pod A, Pod B and Pod C). The Pods are capable of flight and are extremely useful in combat in various ways:

- The pod can provide information. It can access the YoRHa network and draw knowledge from its vast archives. Additionally it can scan the surroundings and observe and analyze opponents.

- It can use its respective weapon to perform long range attacks on the enemy. The pod is able to lock on to its target in order to greatly improve accuracy and trace enemy movements automatically. Those three pods each hold a different one of the three following weapons:

- It can provide support by hacking into computers and in case of robotic enemies it can hack the enemy itself.

- It can use special pod programs to achieve various different effects. After activating a pod program the pod has to wait for a short time before he can use the next program. Usually a pod executes a program on his own. Charging these program allows the pods to synchronize and perform greatly enhanced versions of the programs. These are the available pod programs:

Plug-in Chips are items that can be implanted into androids to improve their abilities or to enable them of executing certain actions. The most important of those chips is the OS chip that contains the androids central system. Here is a list containing relevant chips (For a list with all chips look here):

System Chips contain the androids central system and allow an android to customize the information displayed on the combat visor. It can be used to display information on enemies and surroundings.

Defense Chips prodive various ways of improving an androids defensive capabilities. Some of those chips grant a healing ability to the android (Because it was never depicted in the game it is to assume that the healing chips are not capable of replacing sewered limbs).

9S has a wide variety of weapons at his disposal. This is a list of all weapons available and their respective abilities: 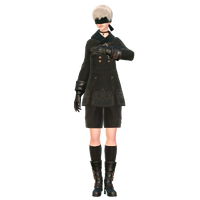 Start a Discussion Discussions about YoRHa No.9 Type S