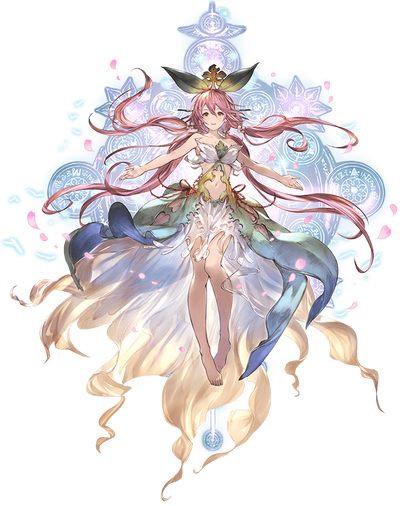 Yggdrasil, guardian of cultivation, watches over the trees of Lumacie Archipelago from deep within a secluded forest. These trees have survived for many millennia; their seeds were first planted long ago by the Astrals. For ages she has been a silent witness to all around her, unmoving from her place in the forest. Now she longs to journey out from her home and see the world. But without the ability to speak, there is only one who can hear the innermost desires of her heart.

Superhuman Physical Characteristics, Flight, Decent Hand-to-hand Combatant, Weapon Mastery, Berserk Mode, Immortality (1, 2, 3, 4 and 5, 8 in her true form), Non-Corporeal and Abstract Existence in its true form (Type 1; Primals, in their true forms, are abstract without any kind of form, representing their elements or abstractions), Regeneration (Mid-Godly; Primals are capable of regenerating after being reduced to their concept), Resurrection (Primals can resurrect themselves, though this takes extremely long amount of time thus it's not combat applicable), Summoning (Primals can summon monsters), Aura, Statistics Amplification, Earth Manipulation, Clairvoyance (Capable of gazing at the realm's future), Forcefield Creation (With Terra Mirata), Healing, Power Nullification (Capable of nullifying debuffs), Plant Manipulation (Has control over the green), Empathic Manipulation (She is more likely to be attacked than her ally), Damage Boost (Only against Water enemies), Glyph Creation, Energy Projection, Accelerated Development (She experience and learns faster than Captain or Rosetta), Stealth Mastery, Large Size (Type 1 to 2), Limited Information Manipulation (She is created to store information and knowledge to her body), Size-Shifting, Self-Sustenance (Type 1 and 3), Magma Manipulation, Life Manipulation, Resistance to Sound Manipulation and Text Manipulation (For someone like Yggdrasil, the concept of words and texts isn't applicable, hence she can't speak)

Same but stronger plus Sound Manipulation (Can create sound that damage the opponent), Paralysis Inducement (Party couldn't move while fighting her), Petrification (With Terminal Lyminox), Mind Manipulation and Willpower Manipulation (Passively make others feel her emotional pain and cries, reducing their will to fight or go wild in the process, soliders fell to her mind control just by being near her), Spatial Manipulation (The space around her can't be even called a proper space), Absorption (Was absorbing Rosetta before being released), Fusionism, Resistance to Resistance Negation, Gravity Manipulation, Power Nullification, Statistics Reduction, Poison Manipulation and Perception Manipulation (Immune to these effects during the story)

Stamina: Extremely High (Was able to fight against the corruption of her essence by Erste Empire for long periods of time and has sustained an island for thousands of years)

Range: Tens of kilometers (Able to reach the entirety of her island)

Intelligence: Unknown (Was created to be an information storage by the Astrals but has limited knowledge about the world)

Weaknesses: Weak to Wind based attacks. She can't use her special attacks when Overdrive is broken. Her being abstract is only applicable when her power is drained completely, and this is downside than anything else, as Primals in their abstract forms are completely powerless.

Retrieved from "https://vsbattles.fandom.com/wiki/Yggdrasil_(Granblue_Fantasy)?oldid=5804372"
Community content is available under CC-BY-SA unless otherwise noted.