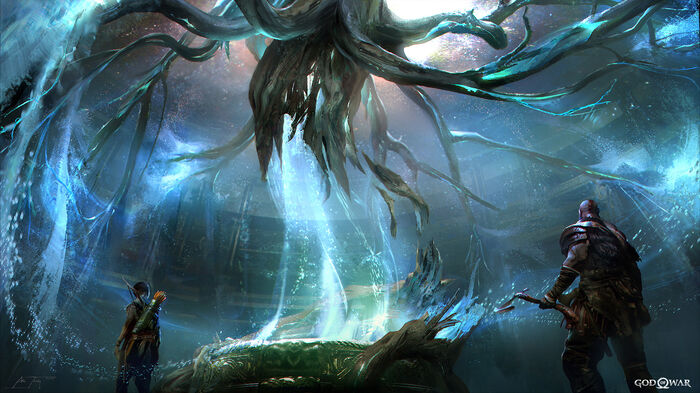 The Yggdrasil, alternatively the World Tree or Tree of Life, is the force that appears to be responsible for all that there is in the Norse Realms of God of War. Directly interwoven into the grand tapestry that is reality, all of existence is part of Yggdrasil and all of existence eventually returns to it, only to be birthed anew in a grand, neverending cycle that far transcends mortal and godly notions of time and space alike.

Age: Inapplicable - predates the concepts of space and time

Powers and Abilities: Immortality (Types 5 and 9; The very concepts of life and death are merely aspects of it, which it simultaneously encompasses and transcends, and its true form is completely independent from the material existence of even its physical manifestations), Abstract Existence (Type 2 in its physical form; Type 1 in its true form), Conceptual Manipulation (The concepts of Death, Life, Time, Space, Destiny and more are just part of Yggdrasil, and only exist because it sustains them), Existence Erasure (Should one jump out of Yggdrasil's branches, they will be consumed into the void), Nonexistent Physiology (Type 1; The true form of the Yggdrasil does not truly exist, and it simply manifests in a physical form that can be conceptualized by the Norse peoples), Avatar Creation (The tree's physical form is an avatar, created purely for the benefit of physical entities' ability to interact with it), Void Manipulation, Life Manipulation, Creation

Attack Potency: Multiverse level (The Well of Destiny, Urd, which was stated to contain innumerable possible timelines and realities, is but part of the physical "ash tree" form of Yggdrasil) | Low Complex Multiverse level (Simultaneously encompasses and transcends the concepts of space, time and fate altogether, which include the innumerable possibilities contained within the Well of Fate. Even Ragnarok, the destruction and eventual rebirth of the Norse realms is all but part of the neverending grand cycle sustained by Yggdrasil; all existence springs from it, and all existence returns to it)

Speed: Nigh-Omnipresent (The World Tree completely encompasses and is ever-present throughout all of the Norse Realms; the only things outside its reach are other Pantheons' domains, such as the realms ruled by the Greek Gods, etc.)

Durability: Multiverse level (The battle between Thor and the World Serpent, entities capable of ending the Nine Realms, was only able to cause extremely limited damage to the Tree of Life's physical form) | Low Complex Multiverse level

Intelligence: Nigh-Omniscient (Encompasses all knowledge throughout the Norse Pantheon; the only subjects beyond Yggdrasil's sphere of knowledge are the specifics of other Pantheons, such as the land of the Greek Gods)

Note: Do not attempt to scale the Norse Gods to Yggdrasil based off of Thor and the World Serpent's fight "splintering" it. For one, splintering an object only refers to breaking a small piece off of its totality, which, while impressive, is not anywhere near a feat of affecting the entire tree. Second, the Giant Surtr, in his death blow that apparently consumed all of reality and ended even the Aesir Gods, explicitly did not affect Yggdrasil and was just serving its cycle of death and rebirth/beginning and end, as stated by Mimir. As such, it'd be highly unreliable to scale any Gods even to Yggdrasil's physical form.

Retrieved from "https://vsbattles.fandom.com/wiki/Yggdrasil_(God_of_War)?oldid=5689354"
Community content is available under CC-BY-SA unless otherwise noted.