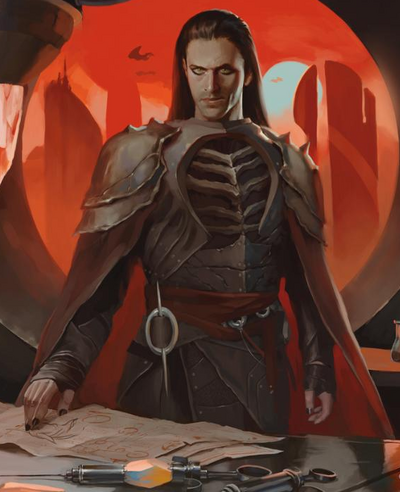 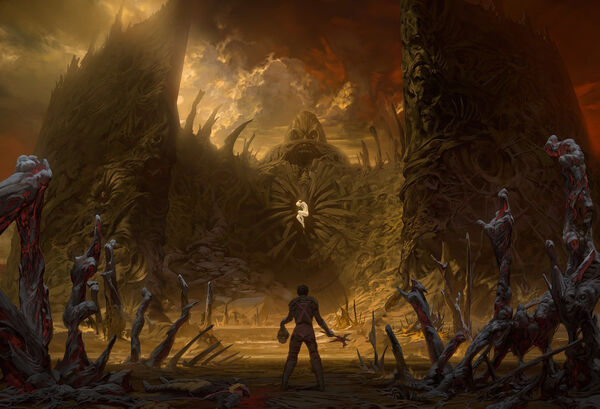 Yawgmoth was a renowned human physician from the Thran Empire who lived many years before the Brothers' War. A visionary and a genius, he sought to heal and advance his knowledge by any means, but he was tainted by his own foul ambition, and he caused many atrocities in the name of his research, or merely on a whim. Eventually, after meeting a Planeswalker, Dyfed, the power-hungry Yawgmoth found his way to Phyrexia, and after he conquered it and made it his own, Yawgmoth ascended to become a godlike being, transcending even Planeswalkers as the Ineffable, the Lord of the Wastes.

Name: Yawgmoth, the Ineffable, the Lord of the Wastes, Father of Machines

Attack Potency: At least Multiverse level+ (Vastly superior to even the combined might of the multiverse's strongest Planeswalkers, which included Urza and others comparable to Nicol Bolas in his prime).

Speed: Nigh-Omnipresent (His research was able to link him with anything across the multiverse, Planeswalkers capable of instantly shifting their position were unable to surprise him in any way), Omnipresent in Phyrexia

Durability: At least Multiverse level+ (It took an entire moon of pure white mana [His natural weakness], a collection of absurdly powerful artifacts that took one thousand years to collect infused into a pure silver golem with the eyes of one of the most powerful Planeswalkers ever and channeled through the Skyship Weatherlight to finally destroy him, after they razed the plane of Phyrexia, cutting Yawgmoth off from his power source).

Stamina: Limitless (Unlike many other characters in the series, Yawgmoth does not need to tap into mana, as he is pure mana itself).

Standard Equipment: All of Phyrexia.

Intelligence: Born into the Thran Empire, Yawgmoth made a name for himself as a physician long before his ascension to godhood thanks to his absolute brilliance and vision, traveling Dominaria and manufacturing many plagues and studying their effects. He was able to cure many diseases as well, ingratiating himself with the people around him thanks to this, his many developments in technology, and his charisma. Ultimately, in his pursuit of power and perfection, seeking to cure death itself and become a god, Yawgmoth fused with the artificial plane of Phyrexia, making it an extension of his will, destroying his opponents and surpassing even Planeswalkers. And, awash in his new godhood, Yawgmoth began to plot his vengeance against Dominaria, perfecting the artificial lifeforms of Phyrexia and pushing them to new heights of power and intelligence.

Weaknesses: Yawgmoth is extremely sadistic and is vulnerable to pure white mana.