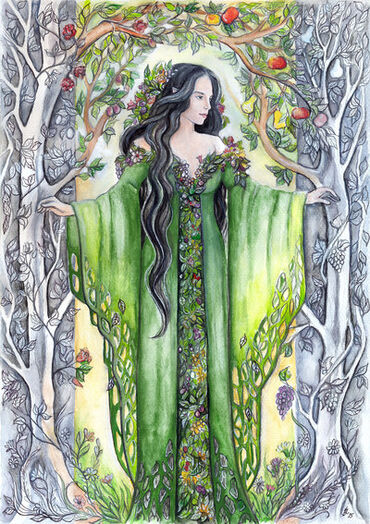 Yavanna, beginning in the midst of the Years of the Lamps, during the Spring of Arda, planted and grew the first living things within the world (Trees and plants). These things she she had long prepared for and, at first, just as every other thing in the world that the Valar had nurtured and perfected, these things prospered and thrived for a time. Melkor, however, had his own plans and desires, for he wished to take the world from his brethren and rule it himself. In the midst of his great fortress, Utumno, in the far north, he sent forth his poisons and darkness into the veins of the world, blighting the Spring of Arda. And he made beasts of ivory and claw. Because of his dark work the things of Yavanna fell sick and rotted. Yet before the Valar could divine the location of Utumno Melkor assaulted and destroyed the Two Lamps, breaking the world.

Afterwards, the Valar relocated to the continent of Aman. There Yavanna and Nienna created the Two Trees, the only light in the whole world at that time. Middle-earth was left in darkness, and Yavanna place the living things that survived in a great sleep, until the rise of the Sun and the Moon many thousands of years later.

After Eru allowed Aulë's creations, the Dwarves, to survive, Yavanna dreaded lest they cut down all the trees in Middle-earth. Aulë, in reply, told her that even Elves and Men, the true Children of Ilúvatar would have need of her trees as well. Yavanna then lamented to Manwë. She questioned whether anything she had made would be free from the dominion of others. Manwë brought her concerns before Ilúvatar in prayer, and Eru did indeed have pity upon Yavanna: He answered her plea by creating the Ents, shepherds of the forest, to protect the trees. She than praise Him, calling Him a merciful lord. Yet Aulë still cautioned that the Children of Ilúvatar would still need from the creations of Yavanna.

It was said that, in the Song of the Ainur, Yavanna sung of branches of great trees that would receive the rain of Manwë and Ulmo, and some trees sang to Ilúvatar. Indeed she planned that the Great Eagles would house themselves in her trees, yet Eru decreed that only the trees of Aulë, the mountains, would hold them.

In the beginning of days Yavanna planted the first seeds of Arda and watched over all growing things. As Morgoth was corrupting her beloved creations she contended with him, and supported all the plans put forth against him. After his expulsion from Arda during the First War, she planted all the seeds that she had for many long years devised and life came to Middle-earth. Thus began the Spring of Arda, although in the beginning no flowers bloomed.

After the destruction of the Two Lamps and the founding of Valnior Yavanna sat and sang upon the green mound of Ezellohar, while the other Valar sat and listened. Her song, with the aid of the tears of Nienna was what brought forth the Two Trees, her greatest creation, which gave light to Aman. However, Yavanna still did not forsake the Outer Lands. At times she would come there and heal the wounds of Morgoth (Just as Oromë occasionally traveled therw) and urged the other Valar to wage war on him before the Awakening of the Elves.

When the Elves built the city of Tirion upon the isle of Tol Eressëa, it was Yavanna who fashioned the tree Galathilion, a lesser image of Telperion, for the court beneath the Mindon.

After the destruction of the Two Trees Yavanna examined what remained of them and said that if she could use the light of the Silmarils she could heal them, thpugh she would need to break them. This light she was denied by the will of Fëanor, who said that if the Silmirals were broken he would die of greif. Doing what she and Nienna could, they managed to bring forth one silver flower from Telperion and one golden fruit from Laurelin. Than Aulë fashioned vessels for them, createing the Moon and the Sun.

Yavanna enriched the land the land of Andor, which was risen by Ossë and enriched by Aulë, for the Men who had stood with the Valar in the War of Wrath. When the Edain came to this island they created the realm of Númenor. Centuries later, when the Valar decided to send emissaries to the mortal lands in the form of the Istari, Yavanna begged the Maia Curumo to take her servant, Aiwendil, with him.

Powers and Abilities: Superhuman Physical Characteristics, Flight, Regeneration (Low-Godly), Immortality (Types 1 and 3), Shapeshifting, Size Alteration, Elemental Manipulation, Life Manipulation, Empathic Manipulation (The lords of the Ainur could create joy), Healing, Telekinesis, Transmutation, Precognition, Invulnerability (The Ainur are immune from harm via conventional weaponry, as seen when, upon unlocking more of his divine power, Gandalf became invulnerable), Resistance to Death Manipulation (In Lord of the Rings the land of the dead is a real tangible place, Mandos, and can be affected and exited. Ainur don't go there upon death, rather becoming spirits until the regenerate. The only way to keep them there is if they are physically brought there and held by physical might), Intangibility and Non-Corporeality (At the very least in spirit form) | Intangibility and Non-Corporeality, Reality Warping, Conceptual Manipulation (Created all the plants and animals of the world), Acausality (Likely Type 4; Just like the other Ainur, she can freely exist and interact in the Timeless Halls, which have a separate causality and timeline than the normal universe)

Attack Potency: At least Multi-Solar System level (Comparable to Varda), likely Multi-Galaxy level (Helped build the physical universe) | At least High Universe level, likely Universe level+ (One of the 14 Valar, all of whom control aspects of the universe, and are second only to Eru Ilúvatar. She should be at least somewhat comparable to Melkor, who was capable of effecting the Themes of the Ainulindalë, of which the third created the universe, with his very thoughts. All Valar are incomparably superior to their Maia counterparts)

Speed: Unknown. Massively FTL+ combat speed and reactions (Doubtless above Ancalagon the Black) | Immeasurable (Existed in the Timeless Halls, a place that transcended linear time and was best likened to a higher temporal dimension)

Intelligence: Extremely high (As one of the Valar, she has unfathomable knowledge of the universe)

Notable Attacks/Techniques: Like all Ainur, Yavanna has access to a wide range of dangerous powers, mostly related to the elements.

Life creation: Yavanna is a creature of life and nature, having deep control over it. She uses this power to heal the wounds of Melkor and bring life to the Earth. Her power is so great she could create the Two Trees (With the help of Nienna), of which a single flower became the Sun and Moon.

Powers of the Ainur: As a Vala, Yavanna has access to wide variety of potent and devastating supernatural abilities, for the Ainur (The Valar specifically) were created as elemental spirits, and each have divine authority and absolute control over a certain aspect of nature. Each and every one of the Ainur is also able to manipulate magical energies and reality to serve their needs, and take any form they wish, even intangible and non-corporeal spiritual forms. Given she is a Vala, above any of the Maiar, there is no doubt she can use all of the basic Ainur powers.

Retrieved from "https://vsbattles.fandom.com/wiki/Yavanna?oldid=5510392"
Community content is available under CC-BY-SA unless otherwise noted.