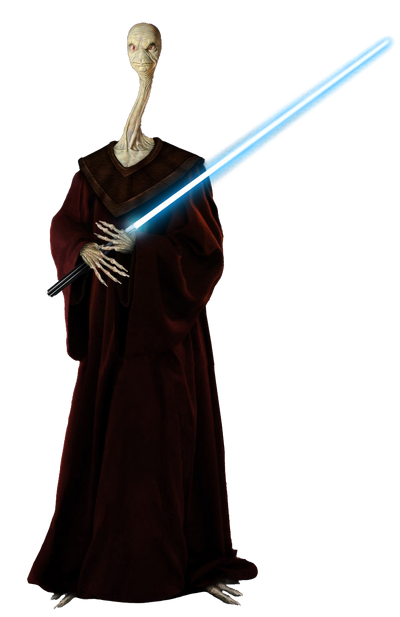 Yarael Poof was a male Quermian Jedi Master and revered member of the Jedi High Council in the years leading up to the Clone Wars. Rather mischievous in his use of the Force, he prioritized the use of his mental abilities and thus rarely used his lightsaber.

Attack Potency: Planet level (Managed to contain the energy of the Infant of Shaa while mortally wounded)

Speed: Relativistic with FTL reactions and combat speed (A peer of characters like Obi-Wan Kenobi)

Lifting Strength: Peak Human naturally. Can be augmented to Superhuman levels with the Force. Class G with telekinesis (Should be far superior to Padawan Rivi-Anu who, while injured and exhausted, briefly held up a Venator-class star destroyer [a heavy cruiser class warship whose mass should be several to tens of millions of tonnes])

Note: While Yarael Poof exists within Disney canon, this profile only covers his feats in Legends, due to his complete lack of canon feats.