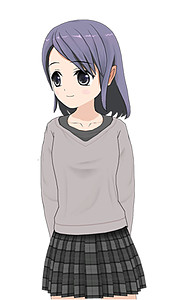 Yanna Curtis was a young college student. One day, she was dared by Venice and her group into visiting “the mansion” in order to join their group. Yanna met her demise to the TriNemesis, as had everyone else before her.

A week later, she met Myles, who had been pressured to spend that night in the mansion. The two became friends. The day after, she killed Venice before returning to the mansion to talk to Myles, who had just discovered her corpse.

40 days later, Yanna and Myles were somehow sucked into Darius’ copy of DE**.EXE. When the game was finally released on February 7, 2018, Darius worked with the girls to delete Kara. Yanna specifically ambushed Kara by creating an “alien” to attack her with once she escaped into the Limbo System, or the space outside of the game.

Months later, in May, Yanna, and soon Myles, started appearing in DERE EVIL.EXE. When the game was released on July 3, 2018, Darius tried to convince the player to delete Yanna so they could try and bring Myles back to life. Yanna attacks the player’s character, Knightly, and corrupts the game. After tricking the player and Darius into several levels of bonus games, making them think they made their way into the Limbo System and eventually the Core. There, Yanna corrupts the player, taking control away from the player, before Darius freezes the game and gives the player the opportunity to delete Yanna from the game. Whether the player chooses to delete them or not, Myles and Yanna were already prepared. As previously stated, Yanna had tricked the player and Darius into believing they had accessed the Limbo System and Core by creating a series of bonus games. If the player chooses to delete Yanna and Myles, it only deletes their avatars within that final bonus game, sparing the real Yanna and Myles in the game’s files.

Powers and Abilities: None Notable | Immortality (Type 7), Flight, Teleportation, Body Control (As a ghost, her body can move in unnatural ways), Possession (The only way to be resurrected is to take control of another person’s body) | Immortality (Unknown Type as a game character, Type 9 via bonus games and avatars), Flight, Teleportation (Can teleport herself or others), Body Control (Can move her body in unnatural ways), Surface Scaling, Telekinesis (Can shake doors and throw chairs around), Intangibility (Can float through walls), Technology Manipulation (Can turn on tvs, Can interact with the descriptions of DERE.EXE and DERE EVIL.EXE on their download pages, Can cause the game to appear to have crashed), Sound Manipulation (Can play sounds from across the game), Data Manipulation (Can manipulation the code of the game she’s in, Can create glitches, Can create a series of Bonus Games), Creation (Can create entire bonus games with their own characters and gameplay), Plot Manipulation (Can bring the player outside of Darius (the game developer)’s view, Can take control of the player’s character) Reality Warping (Can change the game’s controls, Can cause Tombstones to summon enemies instead of being checkpoints, Can cause a character that falls off the bottom of the screen to fall from the top instead of dying), Corruption (Can take control of the game she’s in, Can take control of the player’s character, rendering the player unable to control them), Existence Erasure (Threatened to delete Knightly from the game, rendering the game unplayable), Weapon Creation, Energy Projection via Gun Wheel, Avatar Creation (Can create avatars of herself and others), Summoning, Duplication (Can create a copy of a person that copies their movement, Can create a hostile copy of a person that mirrors their left-right movements), Fire Manipulation, Darkness Manipulation (Can create dark projectiles)

Attack Potency: Human level, possibly Street level (May compare to Doctor Rotschstein, despite being younger) | Unknown | Below Average level (Her consciousness exists in a video game)

Striking Strength: Human Class, possibly Street Class (May compare to Doctor Rotschstein, despite being younger) | Unknown | Below Average Class (Her consciousness exists in a video game)

Durability: Human level, possibly Street level (May compare to Doctor Rotschstein, despite being younger) | Unknown | Below Average level (Her consciousness exists in a video game)

Intelligence: Above Average (Tricked the player and Darius into a series of Bonus Games)

Weaknesses: Fears the TriNemesis | If the game is paused, Yanna is paused as well

Retrieved from "https://vsbattles.fandom.com/wiki/Yanna_Curtis_(AppSir)?oldid=5782667"
Community content is available under CC-BY-SA unless otherwise noted.